What kind of meat goes well with potato soup?

That’s a question we get all the time from home cooks, friends, and family members.

But the answer isn’t always obvious! It depends on what kind of potato soup you’re making and what your main protein is in the dish.

There are a few different types of potato soup: creamy, chunky, with or without milk, vegetarian—and that’s just for starters.

The type of meat you choose to serve with your potato soup can make or break the meal, so we’re here today to help you pick the perfect thing!

What Meat Goes with Potato Soup?

Meat is a central element of many potato soups, and this is because it combines well with both the starchiness of the potato and the creaminess of the soup. There are several different meats that go well with potato soup. Chicken, sausage, and beef are all excellent choices. Ham can also provide an extra layer of flavor to your soup.

Potato soup is a warm, hearty dish that goes well with all kinds of meat.

What kind of meat you serve with your potato soup will depend on the specific variety of soup you’ve made, as well as the occasion and your personal tastes.

Here are 14 kinds of meat that go well with potato soup:

Crisp, salty bacon is a classic addition to many different types of soups, so it’s no surprise that it pairs nicely with potato soup.

To make sure the flavors don’t become one-note, pair your bacon with a hint of green onion or a sprinkle of cheese.

If you’re looking for the perfect meat to include in your potato soup or serve alongside it, look no further than ham.

We all know that ham and potatoes go together like a fine wine and cheese, so the next time you’re serving up some classic potato soup, consider adding in or serving with ham to add a whole new dimension of flavor to your dish.

You can use pre-cooked ham chunks, ham slices, or even ground ham as a base for your soup – or just heat up some thick slices of precooked ham and serve them alongside!

This will add extra body and texture to your soup and give your guests something substantial to chew on.

Beef can be a great complement to the rich flavor of potato soup—but it can also be too much of a good thing.

We find that serving it sliced thin is the best way to go.

That way, you can make sure the potato soup’s flavor isn’t drowned out by the steak slices, but that you still get a great meaty bite every now and then.

When it’s cold outside and the snow is falling down, there’s no better way to warm up than with a big bowl of potato soup.

If you’re someone who’s looking for an extra protein kick to your meal, why not add some turkey?

When you do this, you get the best of both worlds: meaty flavor and hearty texture in one bite.

This combo works because the turkey adds a crispy texture that complements the smoothness of the potatoes.

The mild flavor of the turkey also lets the classic taste of the potatoes shine through without being overshadowed by strong tastes like beef or pork.

Here’s how you can make it work:

Chicken tends to be fast-cooking and inexpensive without losing the flavor or texture you get from other meats.

It’s also versatile—it can be shredded, cut into chunks, or left whole.

For added flavor, try adding some chicken broth to the mix when cooking your potatoes for soup!

Lamb is the perfect option for both putting in your soup and serving alongside it.

If you don’t mind your lamb tasting a bit like potato, put some chunks of lamb into the soup while it’s cooking to make sure it’s tender enough to eat.

Or you can smoke your lamb, season it with a little rosemary and salt, and serve it up with slices of fresh baguette to dip in the soup.

Either way, you can’t go wrong!

Prosciutto, the Italian dry-cured ham, is the perfect addition.

You can either chop up some prosciutto into your soup for a savory, salty kick, or you can slice some and serve it on the side for a hearty meal that’s guaranteed to be filling.

Pair this with an Italian white wine, like Vermentino or Soave.

Pepperoni is a thin, dry-ish kind of cured meat that works really well as a topping on pizza or sandwiches; it has pretty strong flavor, and its texture holds up when paired with soft ingredients like potatoes and cheese.

This makes it an ideal option if you want to mix your pepperoni into your potato soup.

It’s a tasty meat that goes really well with the taste of potatoes and broth.

Plus, the Canadian bacon is salty and fatty enough to give the soup a little extra oomph and make even the blandest potato soup absolutely delicious.

If you’re not sure how to make it work, here are a few suggestions:

Pork belly is an ideal choice for pairing with potato soup because of its savory flavor and its ability to be cooked in many different ways.

It’s also a very versatile ingredient that can be eaten on its own or incorporated into other recipes.

Pork belly has a rich flavor that pairs well with the light, creamy taste of potato soup.

It can be served alongside your favorite recipe as an appetizer or snack before dinner time, or even cooked into your meal itself!

We suggest baking in parchment paper at 450F until crispy on top (about 20 minutes), then grilling over medium heat until fully cooked through (about 30 minutes).

This will give you a nice crusty exterior while keeping all of those delicious juices inside!

You can also try roasting them at 425F for 15-20 minutes on each side if you want something less fatty but still flavorful.

Duck is one of our favorite meats to pair with potato soup.

It’s also an ideal meat for winter, when you want hearty and warm flavors that keep you feeling full.

When you’re having a group over for dinner, duck is a great choice because it’s beautiful on a platter and delicious.

There are many ways to pair duck with potato soup, but we particularly like serving them together as part of a larger meal.

For example, start with a small salad of seasonal greens—we love arugula and pomegranate seeds for this time of year—and then serve the main course: duck breast alongside a bowl of steaming potato soup.

You can even serve this meal family-style if you’d like, in which case we recommend serving the main course on platters with root vegetables such as carrots or parsnips alongside the duck breast and in the soup!

If you’re dealing with a picky eater or someone who doesn’t like to try new things, you might want to stick with a mainstay like chicken.

But if you’ve got a meal with some well-adventurous eaters, you’ll probably want to get creative and add something that goes outside of the box.

Rabbit is often overlooked as an ingredient for soups, but when done right, it’s the perfect addition to both creamy potato soup and starchy potato salad.

In order to make this combination work well, you’ll have to think about your preferred flavors and textures.

Rabbit tends to be leaner than other meats, so if you’re looking for something rich and juicy, look into gamey meats like rabbit or venison.

If you’d prefer your meat cooked through rather than seared or browned, then chicken is going to be your best bet.

Rabbit also has a rich flavor profile that will play off of the smooth creaminess of the soup nicely.

If you’re making potato soup for a dinner party and want something that’s a little more elegant than bacon or sausage, venison is a great option.

The key to using venison as the meat in your potato soup is to ensure that the flavor profile works.

If your soup has a bold, spicy flavor profile, then venison is going to work well.

If not, then you may find it too overpowering.

Here are two tips to help make sure that your dish comes out great:

If you like to mix things up and gussy up your potato soup, try adding cubed brisket to your recipe.

This is an especially great combo if you’re going for a chunky potato soup that has some green in it—so get out your celery and carrots!

Cubed brisket will add some heft and meatiness to your bowl without overpowering all those other flavors.

How to Choose Meat that Goes with Potato Soup?

Potato soup is one of the most versatile dishes out there.

It’s a classic, and it can be dressed up or dressed down depending on what kind of meat you want to pair it with.

Here are some tips for picking the right kind of meat for your potato soup:

No matter what kind of meat you choose to pair with potato soup, you’re sure to have a delicious meal on your hands! 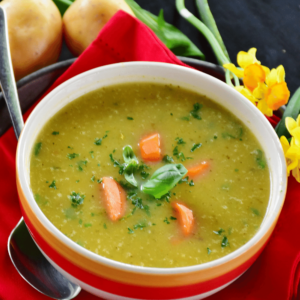 What Meat Goes with Potato Soup? (14 Kinds of Meat)

The biggest consideration when pairing meats with potato soup is the soup's flavor profile. Are you going for a classic creamy potato? Or are you trying to shake things up and make a salsa verde or curry-based soup? Are you planning to add bacon on top of your soup, or are you sticking to more traditional garnishes like cheese? The answers to these questions will help determine what kind of meat will be best for your potato soup.For example, if you're making a more traditional potato-based dish, try adding roast beef, ham, or sausage. Pork goes really well with potatoes, and the fattiness of the meat will help counteract the savory broth and creamy base of the soup. If you're looking for something a little more unexpected, try adding chicken sausage or even pulled pork. The acidity in the sauce will help balance out the heaviness of the potatoes.If you're not using a broth-based soup and are instead opting for something like salsa verde or curry, then feel free to be a bit more adventurous with your meat selections. Try lamb, duck breast, or venison as they will pair well with either spice profile.
Print Recipe Pin Recipe
Prep Time 5 mins
Cook Time 5 mins
Total Time 10 mins
Course Soup
Cuisine American
Servings 4 people
Calories 250 kcal