If you’re planning a meal around potato soup, whether it’s for a family dinner or just because you want a cozy night in, you’re going to want to make sure you have a few dessert options on hand.

Potato soup is delicious, but it can be a little dry if eaten on its own.

To combat this problem, I’ve put together this list of 15 desserts that go well with potato soup.

So next time you’re thinking about making some soup, think about what dessert would go best with it!

Potato soup is a classic, and it pairs well with a wide variety of desserts.

So, here are 15 desserts that I think go especially well with potato soup:

I love the combination of warm apples and cinnamon with a hearty bowl of potato soup.

The sweetness of the apples complements the natural umami flavor in the soup, and the cinnamon adds another layer of warmth.

You can’t go wrong with this pairing!

The banana pudding has a soft texture that makes it work well with the smooth consistency of potato soup, and both flavors are mild enough to complement each other without overpowering either dish.

Carrot cake is one of my favorite desserts on the planet because it has such an addicting flavor combination: carrot cake + cream cheese frosting + walnuts = pure heaven!

And when you pair it with potato soup?

This is an old favorite.

I love chocolate cake because it’s so rich and satisfying, but also because it has such a long shelf life—it’s great for leftovers!

If you’re planning on making this dish in advance, just be sure to serve your cake warm.

French toast goes great with any type of breakfast food—it’s one of my favorite breakfast dishes!

But if you want to serve french toast as dessert, put some maple syrup on top and you’ll have a decadent treat that’s perfect for pairing with potato soup.

If you’re looking for something more traditional than chocolate cake or french toast, pecan pie is always an excellent choice!

This dessert has been around for ages because it’s so good—it’s sweet and nutty at the same time, which makes it the perfect addition to any meal that isn’t already sweet enough on its own.

This dessert is traditionally made with pumpkins and spices, and it goes perfectly with the warm, creamy flavors of potato soup.

It’s especially fun to eat the pumpkin pie first and then sip on your potato soup while you’re waiting for it to cool down enough to eat!

Apples are another classic fall flavor, and they go great with potatoes.

The sweet flavor of this dessert complements the saltiness of potato soup very well.

Plus, you can use whatever kind of apple you like most in your crisp—it’s all about personal preference!

Brownies are one of my favorite desserts because they have so many different variations!

You can make them as dark or light as you like—and even add in some extra chocolate chips if you want something extra sweet!

Soup and ice cream is such a classic combo—you can’t go wrong! I like to make my own ice cream because it always tastes so much better than store-bought.

If you don’t have time to make your own ice cream, there are plenty of great brands out there that taste just as good (if not better) than homemade versions.

This is a great pairing because both the creamy caramel and the sweet cheesecake are perfect complements to the salty potato soup.

The salty flavor of the soup will accentuate the creamy texture of the cheesecake, which will make you forget about any other dessert you might have thought about eating before this one!

This dessert is so simple, but so delicious!

It’s got just the right amount of sweetness (but not too much), plus it has just enough creaminess to make it feel indulgent while still being light enough not to weigh down your stomach after eating it with a hearty bowl of soup.

13. Waffles (with whipped cream and syrup)

This soup goes really well with waffles because they’re both warm, comforting foods that make you feel like everything’s going to be okay.

Plus, you can never go wrong with waffles and whipped cream!

The tartness of lemon bars pairs really well with potato soup because it cuts through some of that saltiness in your mouth and makes it easier to enjoy your meal.

The lemon also helps cut through some of your tongue’s bitterness receptors so that you can enjoy all those flavors without feeling like you’re chomping down on gravel!

Banana bread is one of my favorite things to eat any time of year, but it goes especially well with potato soup in the wintertime because you can eat it while sipping on hot chocolate or tea (or even coffee if you’re going for something really rich).

How to Decide Which Dessert to Serve with Potato Soup

When it comes to deciding which dessert to serve after potato soup, there are a few things to keep in mind.

When it comes down to it, though, all that matters is what YOU like! 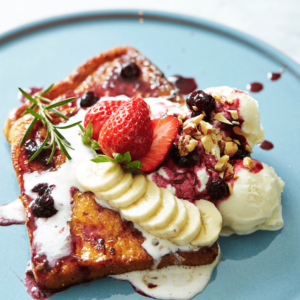 After you've had a bowl of warm, creamy, comforting potato soup, you'll want to finish your meal with something sweet.I recommend serving a dessert that pairs well with the flavor profile of your potato soup. This will let you experience the sweetness and creaminess in the soup again in a new way.
Print Recipe Pin Recipe
Prep Time 5 mins
Cook Time 10 mins
Total Time 15 mins
Course Dessert
Cuisine American
Servings 4 people
Calories 390 kcal