If you’ve got a bottle of BBQ sauce in your pantry and no idea what to do with it, we’ve got some ideas.

Here are 23 uses for BBQ sauce if you’re a vegetarian:

1. Add Some to Your Favorite Vegetable Sandwich

If you’re craving the flavors of barbecue but not the meat, try adding some BBQ sauce to your favorite sandwich instead!

Just slather it on some bread and pile on whatever veggies sound good to you.

You can even add some vegan cheese if you want to make it extra delicious!

Just be sure not to use too much of it—BBQ sauce is pretty high in calories!

2. Add Some Tangy Flavor to Your Next Stir Fry

You might not think that stir fry would benefit from adding BBQ sauce, but trust us—it will!

Just add a little bit of your favorite brand of barbecue sauce into your stir fry recipe and see how much more flavorful it becomes.

It’ll add just enough tanginess without overpowering other ingredients like onions or peppers.

3. Spice up Your Morning Omelette

If you like your eggs spicy, why not spice them up with some BBQ sauce?

Try mixing a few tablespoons into your omelette filling before frying up an egg or two.

The firey flavor will wake up anyone who is feeling sluggish in the morning and give them something new to look forward to during their breakfast routine!

4. Try Adding Some BBQ Sauce to Your Favorite Soup Recipe

In some soups, like tomato bisque or cream of mushroom, adding a bit of BBQ sauce can help boost flavor without making the soup taste too sweet or salty.

Just be sure not to go overboard with this one—you don’t want your soup tasting like barbecued chicken!

5. Spruce Up Your Salad Dressing

Another way to use BBQ sauce as a vegetarian is by spicing up your salad dressing with it!

Just add a little bit of the sweet and spicy flavor of BBQ into your favorite vinaigrette or homemade dressing recipe, and voila!

You’ve got yourself a new way to dress up your greens that is sure to please everyone at the table.

6. Add Some Flavor to Your Pasta Dish

Pasta dishes are always a hit with vegetarians because they can be so versatile and flavorful!

If you want a little extra kick in your pasta dish, try mixing in some BBQ sauce at the end of cooking time.

The sauce will give it an extra touch of sweet tanginess that will really bring out all the flavors of your meal.

This is especially great if you’re using something like tomato-based pasta sauces as a base for your dish—the sweetness from the tomatoes will complement the smoky flavor nicely!

If you do love grilled veggies, try making a vegan glaze out of your favorite BBQ sauce. It’s easy as pie!

Just brush it on after cooking and serve with some baked potato fries or other side dishes like coleslaw or corn on the cob—your friends will be amazed at how this simple combination tastes like something out of an upscale restaurant!

8. Mix It Into Your Baked Potato

Whether you’re at home or out with friends, mixing BBQ sauce into a baked potato is an easy way to enjoy both sides of this classic meal.

Simply bake up your favorite type of potato and then either add some of your own homemade BBQ sauce or use store-bought sauce instead!

You can also try adding bacon bits or other toppings like cooked onions or cheese if you like!

9. Make Your Own Veggie Burger

This one is pretty self-explanatory.

Just throw together some veggie burgers with your favorite toppings, then slather them with BBQ sauce before serving them up on a bun (you can also serve them over rice or noodles).

It’s a great way to get your daily veggies and satisfy your taste buds at the same time!

10. Use It as a Topping on Your Favorite Salad

In order to get the most out of your salad, add some BBQ sauce as an optional topping.

Just drizzle a little bit over your favorite greens and let them soak up all those amazing flavors!

You can even go wild with different kinds of peppers and onions for extra pizzazz!

And remember: just because it’s healthy doesn’t mean it can’t be spicy!

11. Use It As a Marinade for Tofu or Seitan

You can also use BBQ sauce as a marinade for tofu or seitan.

Simply cut up some tofu or seitan into cubes and marinate them in BBQ sauce for about an hour before grilling them over medium heat until cooked through (about 5 minutes per side).

12. Use It As A Dipping Sauce For Chips And French Fries

Its sweet and spicy flavor will complement any type of snack food that needs a little extra kick to stand out from the crowd.

So get creative with your favorite snack foods and give them a new twist by adding some BBQ sauce into the mix!

13. Use It As A Marinade For Your Favorite Tofu Dish

Tofu is already delicious when cooked properly, but when mixed with BBQ sauce and baked in the oven for an hour, it becomes something amazing!

You could try making baked tofu by itself or mix it with some veggies like peppers or onions (or both!).

The possibilities are endless!

14. Mix It Into Hummus Or Guacamole To Make Them Extra Yummy

If you love hummus or guacamole, but don’t want to use any animal products in your food, there’s no need to worry—BBQ sauce works great as an alternative seasoning for both!

Simply add a little bit of it along with salt and pepper (or even paprika if you want) into your favorite recipes and enjoy!

You can even add some vegan cheese if you want to make them even more delicious!

See also  What Goes Well with Mango in A Smoothie? (24 Ingredients)

Chili is always great, but if you’re looking for something easy and vegetarian-friendly, try making chili with some BBQ sauce instead of meat!

Just add as much as you’d like depending on how spicy or sweet you like your chili—the more sauce, the more intense flavor there will be!

You could also try using different brands of BBQ sauce if one isn’t quite right for your tastes… there are so many options out there nowadays!

Chickpeas are one of our favorite foods in the world, but they can get boring pretty quickly if they’re just boiled or steamed all the time!

Spice things up by making this vegan BBQ chickpea salad: just toss cooked chickpeas with chopped onion and bell pepper (we recommend red), then add some fresh diced tomatoes and celery (if you have any), and top with your favorite vegan mayo.

It’s super easy, but so delicious!

17. Mix with Broth and Serve Over Rice or Pasta

If you’re looking for something more filling, try mixing your favorite kind of BBQ sauce into some broth with some noodles or rice!

This is also a great way to get more vegetables into your diet—and it’s super quick and easy since everything can be ready after just one trip to the store!

You can also use your favorite BBQ sauce as a base for a pizza sauce.

Just mix together some tomato paste, olive oil, and spices (like basil or oregano) in equal parts until they form a paste-like consistency.

Then spread this mixture over your pizza crust before adding any toppings – it’ll give them extra flavor while keeping them from getting soggy!

Potato salad is always delicious, but adding some BBQ sauce makes it even better!

Just mix together mayonnaise with your favorite brand of BBQ sauce and mix until evenly coated before adding it to your potato salad recipe.

20. Slather Some on Grilled Corn on the Cob for a Sweet and Smokey Flavor

Take corn on the cob from boring side dish to something worth talking about by adding a little bit of barbecue sauce as soon as it comes off the grill.

The sweet and smokey flavors will be perfect with some butter or margarine on top!

21. Throw Some On Your Favorite Vegetarian Grilled Cheese

If you’re looking for something that’s not too heavy, but still packs a punch of flavor, then grilled cheese is the way to go.

And if you want to add some extra spice?

Then throw some BBQ sauce on that baby! It will give your grilled cheese sandwich an extra kick of flavor while still keeping things light enough that you won’t feel weighed down by what you ate later on in the day (or week).

22. Use It To Make A Delicious Sauce

You can also create a delicious sauce by adding some spices to your favorite BBQ sauce recipe and heating it in the microwave or on the stove until it’s bubbly hot!

Then pour this delicious sauce over any veggie dish you want—it’ll be like a grown-up version of macaroni and cheese!

23. Use It To Make A Delicious Vegetarian Meatloaf

If you’re craving meatloaf but don’t want to eat meat, try making a meatless version with BBQ sauce as the key ingredient!

Just mix together some tofu or tempeh (or both!) with BBQ sauce until it forms a paste-like consistency, then bake it in the oven until golden brown on top—it’ll taste just like the real thing! 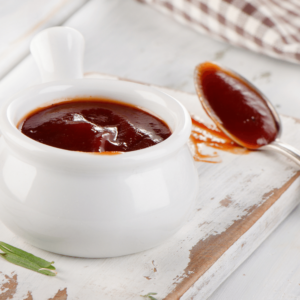 You can use BBQ sauce to flavor a lot of things, but there are so many vegetarian uses for BBQ sauce.You can use BBQ sauce as a marinade for tofu or tempeh. It works especially well if you want to add some smokey flavor to your tofu or tempeh, but don't have access to a grill.You can also use it in place of butter on vegetables or potatoes. You can even use it instead of mayo in potato salad. If you're looking for a way to add more flavor without adding calories, this is an easy way to do it!You can also try using BBQ sauce in place of ketchup on sandwiches and burgers. It adds an extra punch of flavor that you won't get with ketchup alone.
Print Recipe Pin Recipe
Prep Time 5 mins
Cook Time 5 mins
Total Time 10 mins
Course Main Course, Sauce
Cuisine American
Servings 4 people
Calories 255 kcal