Leftover boiled potatoes can be a little bit of a bummer.

They’re not as good as fresh potatoes, and you can only eat so many potatoes before you get sick of them.

But if you’ve got some leftover boiled potatoes, don’t despair!

There are plenty of creative ways to use up your leftovers, and we’ve got 14 ideas for you here.

What to Do with Leftover Boiled Potatoes?

If you have leftover boiled potatoes, there are a number of things you can do with them. You can make potato salad by mixing them with mayonnaise and other ingredients like onions and peppers. You can also mash them up and fry them into hash browns or potato pancakes.

Slice your boiled potatoes into thin slices and bake them in the oven until they’re crispy.

Then season them with salt and pepper, dip them in ketchup, or sprinkle them with cinnamon sugar before baking.

Cube your leftover boiled potatoes and toss with mayonnaise, mustard, celery seed, salt, pepper and chopped onion (or whatever else your heart desires).

If you have any other leftovers lying around (like bacon bits or leftover chicken), add those too!

Make mashed potatoes by mashing cooked potatoes with butter and milk or cream until smooth and fluffy (and then top with cheese if that’s your thing).

Boiled potatoes make the perfect base for crispy French fries!

Just slice them lengthwise into thin slices and fry them up in a pan with some oil until they’re golden brown.

You can also add some salt, pepper, and garlic powder if you want to spice things up a little bit more.

In a casserole dish or baking sheet, layer the slices of potato with cheese (you can use any kind) on top of each layer until all the slices have been used up—you’ll probably need at least three layers to cover everything completely.

Finish off by sprinkling some breadcrumbs on top and baking at 350 degrees Fahrenheit for 30 minutes or until golden brown on top with bubbly cheese underneath!

If you love pancakes (who doesn’t?), then this is an easy way to use up your leftover boiled potatoes.

Simply grate the potatoes and add them to a standard pancake batter recipe.

Cook according to the instructions on the box!

You can also try adding cheese or bacon bits or anything else that sounds good to you—the possibilities are endless!

This one takes a little more work than the first one—you’ll need to peel those potatoes and cut them into chunks before boiling them until soft (15-20 minutes).

Then transfer the mixture to a blender or food processor along with any other ingredients that sound tasty (cheese? bacon bits? carrots?).

Once it’s blended together, pour it back into the pot over low heat until hot enough for serving!

This is a great way to use up leftovers because everyone loves soup!

In a bowl, mash the boiled potato with some butter or olive oil until it’s smooth.

Then add in some flour until it’s thick enough to form into puffs/poppers/tots—you’ll probably need more than one cup of flour.

Cook these in an oven preheated to 400 degrees Fahrenheit until they turn golden brown on both sides (about 15 minutes).

Hash browns are basically just hash-browned potatoes—you know where this is going.

All you have to do is slice up your leftover boiled potatoes into thin slices, cook them in a pan with some oil until they’re golden brown, then sprinkle salt on top before serving!

These are basically the same thing as French fries except they’re deep-fried instead of shallow fried—so they’ll have an even crispier crunch than normal!

Just slice the potato skins lengthwise into strips and deep fry them in oil until they’re golden brown on both sides (it shouldn’t take more than 2 minutes).

Then add some salt/pepper/garlic powder if you want to spice things up a little bit more.

11. Use Them in Place of Rice in Tacos

If you love tacos but don’t love how heavy they can feel after a few bites, try swapping out the rice for some leftover boiled potatoes!

The texture works great with the crunchy shell that most tacos have, and it’s still filling enough to satisfy your hunger.

12. Put Them Into an Omelet or Frittata

You can add leftover boiled potatoes to an omelet or frittata instead of cheese or meat.

Just mix them together with some eggs and veggies, and then cook them however you like!

You’ll have yourself a hearty breakfast that will keep you full until lunchtime.

13. Make Breakfast Burritos Out Of Them

If you’re looking for a creative way to use up leftover boiled potatoes, making breakfast burritos could be just what the doctor ordered!

Take a tortilla, add some eggs, cheese and bacon (if desired), then top it all off with that leftover potato goodness.

Wrap it up tight and serve with salsa for dipping or enjoy them on their own.

You’ve got yourself one delicious breakfast treat that’s sure to satisfy even the hungriest of appetites.

14. Add Cheese and Make Nachos Out Of Them

The best part about nachos is the cheese—but that’s where most people stop.

If you’re looking for something more than just plain ol’ cheese-covered chips, try adding your leftover boiled potatoes to the mix!

It’s a great way to add texture and flavor to your nacho dish without having to spend hours making it from scratch again.

Just dice up some cooked potatoes (they don’t have to be super small) and sprinkle them over your cheese-covered chips before baking them in the oven until they’re crispy at 350 degrees Fahrenheit for 15 minutes or so (depending on how much cheese you used).

Then serve with salsa or sour cream on top!

You’ll never regret having extra potatoes around again (and neither will anyone else). 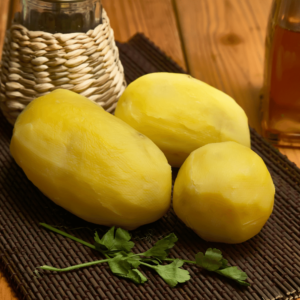 What to Do with Leftover Boiled Potatoes (14 Ideas)

Keyword What to Do with Leftover Boiled Potatoes