I don’t know about you, but I love a good bowl of turkey soup.

It’s the perfect thing when you have a cold or are feeling low.

In this article, I tell you what are the 7 best noodles for turkey soup.

Turkey soup is a hearty, warming, and filling dish that’s quite delicious.

The best part about turkey soup is it’s an extremely flexible dish and you can add pretty much whatever you like!

So what noodles are best for turkey soup?

If you choose the wrong kind of pasta, though, you run the risk of having a bland result.

You may want to choose a thick pasta so that it can soak up the liquid and soak up all of the flavors.

When you are making your turkey soup, you want to make sure that all of the goodness that is in the soup gets soaked up into all of your noodles.

This is why egg noodles are considered to be one of the best noodles for turkey soup.

Since it is important for you to get a lot of flavor from your turkey soup, you need to ensure that every part of your soup has lots of flavor.

Without having egg noodles in your soup, you will not be able to get all of the flavor from the ingredients that are in the soup.

Although you can use other kinds of noodles for your turkey soup, using egg noodles will give you the best results.

Egg noodles have a great texture and they are able to soak up lots of liquid and flavors.

You will find that these are some of the best noodles for any kind of soups or stews that you may find yourself making on any given day.

We’ve made dozens of different types of turkey soup over the years, but we never really cooked with rice noodles until the last few years.

Turkey soup is a staple at our house during the winter and especially on Thanksgiving.

See also  What Crackers to Eat with Tuna (8 Kinds)

When we got some rice noodles in our free box (courtesy of a friend), we decided to try them in our turkey soup recipe. We were hooked immediately.

Rice noodles are great for turkey soup because they’re flat.

It’s always nice to have some sort of noodle in your soup, and the flat ones do a good job of soaking up broth.

They also cook quickly, which is nice if you’re making turkey soup from leftovers.

What makes these noodles so good for this particular recipe is that they cook quickly and don’t get soggy like other kinds of pasta sometimes do.

If you’ve ever had pasta in your soup before, you know that it can get mushy and gross after sitting around for even just a few minutes.

With these noodles, there’s no mushy or grossness!

If you want to make a turkey soup that is thick and hearty, use ditalini noodles.

These short, tube-shaped noodles are small enough to be eaten in one bite. They are also perfect for turkey soup because they’re sturdy enough to hold up in the broth without getting mushy.

Ditalini is generally used as a pasta in soups or salads and is also good with vegetables or meat sauces. Ditalini is excellent for minestrone soup and for stews of all kinds.

Orzo noodles are great for turkey soup. When making turkey soup, the orzo noodles do not get soggy or mushy when soaking up the flavor of the broth.

The flavors of the noodle will not be lost in the soup either.

I have made many soups with orzo noodles and have never had a problem with it turning out great every time!

The other night my family wanted to make some homemade turkey soup but we did not have any egg noodles in the pantry so we decided to use some Orzo noodles that we had on hand.

We cook the Orzo noodles separately and then add it to the broth and turkey once it is cooked. We really enjoy using Orzo noodles because they work really well in soups.

I love soup with noodles and was quite excited when a friend told me about using lo mein noodles in her turkey soup.

See also  9 Types of Meat That Go Great with Applesauce

They are similar to spaghetti but much thinner.

They also cook very quickly, in only about two minutes.

My local supermarket sells them in one-pound packages but they can be found at Asian markets as well as other supermarkets that have an Asian food section.

To soften the noodles, boil them before adding them to the soup.

I usually add lots of fresh vegetables to my turkey soup, including tomatoes, carrots, peas, and green beans.

I also add some celery because it adds a nice flavor to the soup.

If you are using homemade Fettuccine noodles, then you probably won’t need to add any salt because the noodles will already be salty enough.

So inexpensive, in fact, that you can buy them by the case and not feel too guilty if you toss out those few packs that always seem to get pushed to the back of the shelf and forgotten because they’re not as good as fresh ramen.

Second, ramen goes with anything.

I’m pretty sure that if you put it with something disgusting (and I’m thinking here of those nights when I was so hungry that I ate peanut butter and cheese sandwiches), it would overwhelm the other ingredients and make it taste pretty good.

I once heard a story of someone who lived on a diet of ramen noodles, hot sauce, and beer. That’s some hardcore dedication right there; but I bet it tasted OK.

These are awesome because they give you all sorts of different flavors in one package.

All you have to do is open up the package and pour them into your pot o’ noodles! No more having to buy all those little bottles of spices!

You should use noodles for turkey soup because they are delicious and will make your soup better.

One of the things that makes noodles great is their ability to easily absorb flavors from other foods.

Noodles have been used in regional cooking for thousands of years, and are a very popular ingredient in many different cultures.

You can choose from many different kinds of noodles, like egg noodles or wheat noodles.

There are also many different shapes available, such as fettuccine, linguine (see also these linguine recipes), spaghetti (of course), and even more exotic shapes like cellophane noodles!

Noodles are an excellent addition to turkey soup because they absorb the flavor of the turkey broth and add texture to your soup.

They also pair well with carrots, celery, onions and other vegetables that can be found in typical turkey soup recipes.

Additionally, you can use leftover Thanksgiving turkey in your noodle soup recipe!

Noodles in turkey soup can be tricky.

Here are 3 tips for using noodles in turkey soup:

1. Use less noodles than you think you should. The first mistake most people make is to use too many noodles. I used 7 oz of noodles in 2 quarts of broth, which was too much.

2. Make sure your broth is hot enough before you add the noodles to the pot. If you add them to the pot while or after the broth is simmering, they’ll absorb a lot of water and become too soggy, even if you don’t use too many.

3. After adding the noodles to the pot, reduce your burner heat to medium – low. This will keep them from absorbing as much water and becoming soggy while they cook (but it’s not a substitute for making sure your broth is hot enough before adding them). 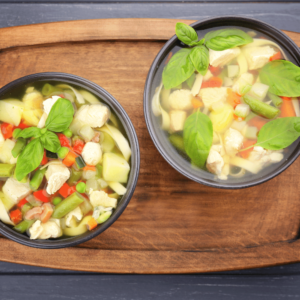