Split pea soup is a classic meal in the winter months, but it can be a little heavy without some kind of accompaniment.

Even if you’re not a fan of cheese on your soup, it can make a huge difference in the overall flavor of the dish.

Here are 10 kinds of cheese that pair well with split pea soup that you can try next time you serve it.

I love a good bowl of split pea soup, but what really makes it taste better is a great pairing of cheeses.

Here are 10 kinds of cheese to try with your next bowl of split pea soup:

Cheddar is a very popular kind of cheese that you can find in almost every grocery store.

It’s also incredibly versatile; it goes great with lots of different soups and salads, so it’s easy to make your split pea soup more interesting by adding a little cheddar on top!

Gouda cheese has a rich, nutty, caramelly taste that often reminds me of butterscotch.

It makes an amazing pairing with split pea soup—I especially love it when the soup is slightly sweet and creamy!

If you’re looking for something new to try with your split pea soup, I highly recommend trying out some gouda cheese.

It’s easy to find at any grocery store and will add a dimension of flavor that you may not have experienced before.

Brie cheese has a mild, buttery and creamy taste that will add another dimension of flavor to your split pea soup.

The slightly sweet flavor and creamy texture of the soup will complement the mild, buttery taste of brie perfectly. It’s like they were meant for each other!

See also  What Vegetables to Serve with Lamb Shanks (15 Veggies)

Blue cheese is one of the most popular cheeses in the world and for good reason: it has a strong flavor that goes well with so many other foods.

It’s especially good with split pea soup because it has a very distinct flavor that isn’t too overwhelming—you can still taste the soup (and maybe even get a piece of bacon in there).

Feta cheese is a tangy, rich and slightly salty flavor that will bring a whole new level of deliciousness to your split pea soup.

The slightly sweet flavor of the soup is perfect for mixing with the salty taste of feta cheese.

It’s also super creamy and smooth, which makes it perfect for adding to any food.

This type of cheese would be great on top of other soups or salads too!

If you’re looking for a way to spice up your split pea soup, Parmesan cheese is an excellent option.

It has a hard, gritty texture that gives it a unique mouthfeel and flavor—it’s fruity, nutty, and salty all at once.

It’s mostly consumed grated over pastas or used in soups like this one.

If you’re thinking about adding it to your split pea soup, here are two tips:

This Swiss cow’s milk cheese has a rich and creamy flavor that’s salty and nutty.

See also  What to Do with Leftover Ricotta Mixture for Lasagna

It’s aged for 12 months, so it’s got just the right amount of maturity to make your split pea soup taste absolutely incredible.

I love using this cheese in split pea soup because it brings out all the flavors of the vegetables and legumes—it’s perfect for bringing out the saltiness of celery, adding depth to carrots, and giving beans a creamy finish.

If you’re feeling adventurous, try shredding some Gruyere over top as well—the rinds are usually not eaten with this type of cheese (they’re too bitter), but they’ll give your meal an extra crunchy texture that will make your mouth water!

Camembert is a cow’s milk cheese that’s similar to brie, but with a more pronounced aroma.

It has a smooth, creamy texture and a soft, moist interior.

It’s a surface-ripened cheese, so it benefits from being aged for three weeks or longer—but even at its freshest stage, it will still have that smooth and creamy texture that makes it so delicious!

I usually use this suggestion by crumbling the cheese into my soup just before serving.

Provolone cheese is an Italian cheese that can be anywhere from mild to sharp in flavor.

It’s a semi-soft cheese which means it has a smooth texture but still holds its shape when sliced.

The taste of provolone really complements the earthiness of split pea soup.

The best part? If the soup is too spicy for you, you can use provolone as a topping instead of croutons or crackers!

This southern Italian cheese is traditionally made from Italian buffalo’s milk and has a somewhat bland taste.

It’s favored as a melting cheese, but it can also be used in salads or sandwiches.

The flavor is delicate and slightly sour.

I like to make my split pea soup with mozzarella cheese sometimes because it adds a refreshing sourness that really complements the earthy flavor of the peas.

There are lots of different kinds of cheese that you can use to top your delicious split pea soup.

Try different combinations and see what you like best. Maybe you’ll even like the flavor of Canadian cheese on a spoonful of split pea soup better than anything else!

But don’t spill a drop—that’s wasted split pea soup, and you know it won’t do for a good impression. 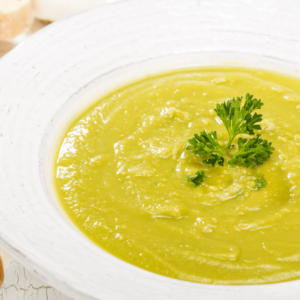 Cheese is a common addition to split pea soup, even if most don't necessarily think about it that way. However, the cheese can add an extra level of depth to the soup.So next time you're looking for new ways to improve your favorite meal, be sure to consider this seemingly simple ingredient that can do wonders for your next bowl of soup!
Print Recipe Pin Recipe
Prep Time 2 mins
Cook Time 2 mins
Total Time 4 mins
Course Cheese, Soup
Cuisine American
Servings 4 people
Calories 360 kcal