It’s an easy sauce to whip up, and it’s so versatile—good on pasta, good on a sandwich, good on a pizza… even good straight off the spoon (don’t judge).

But what if you have a guest who has a dairy allergy?

Or maybe it’s just your aunt with the lactose intolerance who always shows up at family gatherings and insists you make her something she can eat.

Whatever the case may be, we’ve rounded up 11 substitutes for parmesan cheese in pesto so you can keep enjoying this delicious sauce no matter who’s coming to dinner.

But, what’s the best substitute for parmesan cheese in pesto?

The best substitute for parmesan cheese in pesto is a mix of romano and asiago cheeses. They impart the authentic flavor and texture you’re looking for without being too salty like parmesan can be.

11 Substitutes for Parmesan Cheese in Pesto

Parmesan is the classic cheese to use in pesto, but there are a lot of good substitutes if you don’t have parmesan on hand or want to try something new.

Here are 11 of our favorites:

Asiago cheese is a great substitute for Parmesan in pesto.

It’s an Italian cow’s milk cheese that can only be produced in certain regions, and it’s one of the most appreciated Italian cheeses.

Asiago cheese is a hard, natural cheese with a sweet, nutty flavor and a smooth texture.

There are two varieties: asiago d’allevo, which has been aged for a minimum of four months, and asiago pressato, which is younger and has a fresher taste.

When you need to replace parmesan in pesto, you want something that will melt easily and have a similar sweet taste. Asiago fits the bill perfectly!

The cheese melts well in sauces and has an almost buttery quality that makes it ideal for pesto.

If you’ve never heard of Manchego before, you’re going to love this stuff (and the fact that it’s probably sitting in your local grocery store waiting for you to buy it).

It’s a cheese made in the La Mancha region of Spain from the milk of the Manchega sheep (which also happens to be a breed of sheep native to that region).

The shape of this cheese is very characteristic and defined, and it’s an uncooked, pressed-curd cheese.

If you’re looking for a substitute for parmesan cheese in your pesto, and you want something that’s similar in flavor, texture, and appearance, then Pecorino Romano is a good choice.

It’s often used for grating over pasta dishes or pizzas.

It’s made with sheep’s milk rather than cow’s milk and has a hard, crumbly texture.

The country of origin is Italy, but it’s also produced in other countries where demand is high. The rind is natural and the aging process takes at least five months to complete.

To use this substitute in a pesto recipe, just grate it before mixing it together with basil leaves, olive oil, pine nuts, garlic, salt and pepper.

I love, love, LOVE pesto—but I’ve always felt kind of guilty about the amount of parmesan cheese that goes into it.

That’s why I’m a huge fan of substituting queso fresco when I make pesto at home.

Queso fresco is a type of cheese that contains 310 calories per 100 grams.

It’s traditionally made with raw cow’s milk and has just the right combo of slightly salty and mildly tangy fresh taste.

The best thing about queso fresco is that it doesn’t require any complex aging techniques like other cheeses do: it’s generally eaten fresh.

To substitute queso fresco in your pesto recipe, simply replace the parmesan cheese with an equal amount of crumbled queso fresco.

You’ll be amazed at how good it tastes, and you can feel good about cutting down on the saturated fat in your diet!

Cotija is a great substitute for parmesan cheese in pesto.

It’s an aged Mexican cheese named after the town of Cotija, Michoacán.

It’s white in color and firm in texture, and it has a salty flavor that’s similar to parmesan.

When substituting this cheese for parmesan, I like to add about two-thirds the amount of cotija as the original recipe calls for, since cotija is a little saltier than regular parm.

Halloumi is a semi-hard cheese, usually made from a mixture of goat’s and sheep’s milk. It’s an unripened cheese, so it has a unique squeaky texture and high melting point.

This makes it a popular meat substitute as well! The cheese is aged for one to two months, and its country of origin is Cyprus.

To incorporate halloumi into your pesto recipe instead of parmesan, just follow the same steps as you would with regular parmesan cheese—except use halloumi instead!

You’ll end up with a delicious dish without any of the pain.

Cantons of Fribourg are famous for their cheeses, and one of their most popular is Gruyère.

The hard Swiss cheese known as Gruyère, aged 12 months and made with milk from cows that graze in the pastures, has the same mild flavor as parmesan but with a more robust texture.

This cheese is perfect for pesto, which can be any kind of dip. It’s also rich in Vitamin B6 and Magnesium.

Fontina Val D’Aosta is produced in the Italian Alps and is made from unpasteurized cow’s milk. It is semi-firm, with a uniquely rich and nutty flavor.

It is aged for about 3 months, so it has plenty of time for that sharpness to develop.

To substitute it in your pesto recipe, just add in an equal amount of Fontina Val D’Aosta as you would have added parmesan cheese!

If you’re looking for a substitute for parmesan in pesto, comte is one of our favorites.

Comte is a French cheese that’s made from unpasteurized cow’s milk and has a natural rind and semi-hard texture.

It ages for at least 8 to 12 months before it is ready to eat.

So how do you swap it into your pesto?

Just grate about 1/2 cup of comte into your food processor or blender along with your other ingredients and voila!

Your pesto will now have an earthy, nutty flavor just like when you use parmesan cheese in it.

Gouda is a sweet and creamy cheese that’s popular worldwide.

It has 356 calories per 100 grams, and is rich in Calcium and Cobalamin—two B vitamins that are important for the body.

To substitute gouda in a dish, first grate it with a microplane or small-holed grater.

If you don’t have one of those, finely chop the gouda by hand. Then blend it into your favorite pesto recipe.

Like parmesan, Piave comes from cows and is a hard cheese with a very distinct flavor profile and regional origin (in this case, it comes from Veneto).

It’s got that same deliciously nutty flavor that we all love about parmesan—but it also offers up some nice tropical fruit notes.

Some people even say it has the hint of an almond bitterness!

No matter what kind of dish you’re making or topping you’re creating, Piave can take the place of parmesan in pesto.

How Do You Choose a Substitute for Parmesan Cheese in Pesto?

If you’re allergic to dairy, are trying to avoid it for whatever reason, or have just run out of parmesan cheese and don’t have time to get to the grocery store, here are 2 things to consider when looking for a substitute for parmesan cheese in pesto.

1. How Important Is the Flavor?

If you’re using pesto as a pasta sauce, the cheese is going to get lost in the mix.

But if you’re using it as part of a dish where it’s supposed to add flavor, like pesto bruschetta (See Also: Best Tomatoes for Bruschetta), a parmesan substitute might make all the difference.

2. Is There Another Ingredient that Can Be Used Instead?

You may be able to swap the cheese out for something else entirely and still have great results—or at least get most of the way there.

Can I use mozzarella instead of parmesan in pesto?

Yes, you can use mozzarella instead of parmesan in pesto.

Mozzarella is a similar type of cheese to parmesan, and it also has a mild flavor and a firm texture that will stand up to the blending process in your food processor.

Here are some tips:

Can I use cheddar instead of parmesan in pesto?

You sure can use cheddar instead of parmesan!

Pesto is one of the most flexible sauces out there, so feel free to experiment.

If you’re wondering if you can replace one ingredient with another, the answer is probably yes.

When you’re deciding on a cheese to go with your pesto, think about what kind of flavor profile you want.

You can go for a creamier taste with a mozzarella, or get that sharp, salty taste that parmesan provides by using asiago instead.

Cheddar will give your pesto a nutty, mellow taste that goes well with the other flavors in the sauce.

So if you decide to swap out the parm for some cheddar in your next batch of pesto, don’t worry—it’ll be great!

What’s the best vegan substitute for parmesan cheese in pesto?

I’ve been a vegan for a while now and have found that the best substitute for parmesan in pesto is nutritional yeast. It adds a nutty, cheesy flavor that really compliments the taste of pesto, and it doesn’t have any dairy in it.

It’s important to add the nutritional yeast after the pesto has been blended, or else it can get too thick.

You might also need to thin out your pesto with some extra olive oil after you’ve added the nutritional yeast.

11 Cheeses that Go Well with Pastrami

What to Do with Leftover Cheese Sauce: 36 Creative Ideas

What to Do with Leftover Cheese Fondue (30 Creative Ideas)

What Cheese to Serve with Roast Beef: 10 Best Cheeses 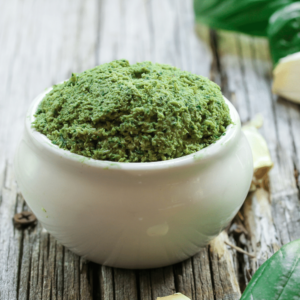 11 Substitutes for Parmesan Cheese in Pesto

If you're looking for a tasty replacement for Parmesan in your pesto, pine nuts can be a great choice. They're already an integral part of pesto, and they're also very high in fat—which is where the fattiness of Parmesan comes from. You can easily mix them into your pesto and get a taste that's just as rich as it would be with cheese.You can also try making some vegetarian or vegan "Parmesan" substitutes on your own. Grate some extra firm tofu and blend it with nutritional yeast until you get a smooth paste. If you want something even simpler, just mix your nutritional yeast with whatever plant-based milk you like best until the mixture is thick but still liquid. You'll find that these "cheese" substitutes taste great and have that same consistency as traditional Parmesan cheese.
Print Recipe Pin Recipe
Prep Time 4 mins
Cook Time 4 mins
Total Time 8 mins
Course Dip
Cuisine American
Servings 4 people
Calories 298 kcal