There are many reasons you might want to avoid raisins in your carrot cake.

Maybe you’re making the cake for someone with a raisin allergy, or maybe you just don’t like the taste of raisins.

Whatever the reason, there are plenty of other ingredients you can use in place of raisins.

Some of the best substitutes for raisins in carrot cake are dried cranberries, chopped apricots, diced pineapple, or chopped dates. You could also use fresh grated carrots, toasted chopped pecans, or shredded coconut.

In this article, we’ll go over 15 substitutes for raisins in carrot cake!

15 Substitutes for Raisins in Carrot Cake

And we’re so excited.

But what if you need a substitute for raisins in your carrot cake recipe?

Or, maybe you’re just looking for some new inspiration to spice up your next batch of the delicious dessert.

Either way, we’ve got you covered with this handy list of substitutes:

Cranberries are a great substitute for raisins in carrot cakes because they have a similar texture and flavor.

They’re also naturally sweet, making them an ideal addition to any cake.

The best way to use dried cranberries as a substitute for raisins is to soak them in hot water before adding them to your recipe.

This will soften up the cranberries and make them easier to blend into your batter or dough.

Cherries are another great substitute for raisins in that they have a similar flavor profile and they’re also sweet enough that they won’t require any additional sugar when added into your recipe.

To use dried cherries as a substitute for raisins: soak them in hot water before adding them with other wet ingredients like milk or eggs so they absorb some liquid and become softer as they cook.

This will help prevent them from getting too hard while baking (which could cause cracks).

You can also try adding them in with dry ingredients like flour and nuts, which will help absorb any excess moisture and prevent them from getting too hard.

Raisins are not the only dried fruit that can be used in a carrot cake batter.

Dried apricots are another popular choice.

They have a similar consistency and sweetness to raisins, but they have a distinct flavor that makes them stand out on their own.

If you want to give them a try in your carrot cake, just add 1 cup of chopped dried apricots in lieu of 1 cup of raisins.

Figs are a bit harder than apricots, but they still have that sweet taste that would work well in your cake batter.

To use them instead of raisins, add 1 cup of chopped dried figs in place of 1 cup of raisins.

Dates are one of the most expensive alternatives!

However, if you’re looking for a truly decadent treat, these little fruits are hard to beat: they have a sweet caramel taste that pairs perfectly with carrots in this recipe (as well as many other baked goods).

This tropical fruit is a great way to get some sweetness and natural flavor into your cake while still keeping it healthy.

It also adds a nice texture and color.

Dried mango has a much more intense flavor than dried pineapple or dried papaya, so you’ll want to use less of it than you would with either of those fruits.

It also has more sugar in it than the other two fruits, which means you should reduce the amount of sugar in your recipe by 1/4 cup if you use dried mango instead of raisins.

If you want more of an exotic flair for your carrot cake, try using dried papaya!

Dried papayas are softer than raisins, so they’ll give your carrot cake an interesting chewiness that makes it taste even better than usual (and we don’t think that’s possible).

Banana chips add sweetness and texture to any dish they’re used in—and they work great as a substitute for raisins.

Just chop them up into small pieces and sprinkle them over the top of your batter before baking!

Crystallized ginger is a great way to add a little bit of sweetness and crunch to your carrot cake without having to worry about it going bad or getting soggy.

It also gives it an extra spicy kick that you might not be able to get from raisins alone.

This can be added right into the batter or sprinkled on top at the end once it’s baked and cooled down a bit so that it doesn’t burn while baking.

Both pecans and walnuts are great substitutes, as are almonds and cashews, and they’ll add a nice crunch to your carrot cake.

You can even mix them together!

Just make sure that whatever you use is chopped into small pieces—they’re going to be mixed in with the batter, so they need to be small enough to stay suspended in the batter without sinking to the bottom of the pan.

Coconut is another great substitution for raisins in carrot cakes because it not only adds extra texture and crunch but also enhances the flavor of your cake by adding sweetness and creaminess.

You can also use chocolate chips instead.

You’ll need about 2 cups of chocolate chips per 1 cup of raisins.

Melt the chocolate chips down over low heat, and use a spatula to stir them until they’re melted.

Your chocolate will be thick at first, but as it cools, it will become thinner and more spreadable.

Spread the chocolate evenly on top of your carrot cake batter before baking.

If you’re looking for something even more unique than chocolate chips, butterscotch chips are sure to fit the bill!

The sweet taste will be different from your typical carrot cake without being overpowering—and it’s exactly what you want when it comes to alternate versions of traditional recipes like this one!

You can use dried currants in place of raisins to make your carrot cake even more flavorful, or you can use them as an alternative if you don’t have any raisins on hand. 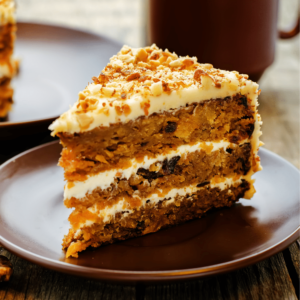 15 Substitutes for Raisins in Carrot Cake

Raisins are a classic ingredient in carrot cake, but they're not the only option.Here are three things to consider when you're picking a substitute:1. How do you want your carrot cake to taste? If you want something spicy, try adding some dried chili peppers. If you want something sweeter, try adding dried cherries or cranberries.2. How does this ingredient look? Dried fruit tends to have more color than raisins do, so if you like the way that looks in your cake, go for it!3. What else is in your recipe? If there are other flavors included in your recipe, make sure that whatever you choose to put in its place complements those flavors well, but doesn't overpower them either!
Print Recipe Pin Recipe
Prep Time 2 mins
Cook Time 2 mins
Total Time 4 mins
Course Baking
Cuisine American
Servings 4 people
Calories 81 kcal