There are a few reasons you might want to look for a corn oil substitute.

Or maybe you have a corn allergy and need to find an alternative.

Whatever the reason, there are plenty of options out there.

12 Substitutes for Corn Oil in Baking

There are many different types of oil that can be used as substitutes for corn oil in baking. Some good substitutes include canola oil, vegetable oil, peanut oil, olive oil, and coconut oil.

Avocado oil can be used as a substitute for corn oil in baking recipes.

Avocado oil is a healthy alternative to corn oil because it is lower in saturated fat and contains monounsaturated fat, which is known to be beneficial for heart health.

Additionally, avocado oil has a high smoke point, making it ideal for baking.

Some people may find that avocado oil gives baked goods a slightly green tint, but this is harmless and will not affect the taste of the finished product.

This oil has been all the rage lately in the natural health community.

There are so many benefits to using it both internally and externally.

I love to use it in my baking recipes as a healthier alternative to corn oil.

It has a neutral flavor so it doesn’t affect the taste of your baked goods, and it’s packed with healthy saturated fats that are great for your body.

For those of you who are still on the fence about using coconut oil, give it a try in your next baking recipe and see for yourself how delicious and healthy it can be!

Most people know that extra virgin olive oil is great for salad dressings and dipping bread, but did you know that it’s also a healthy alternative to corn oil in baking recipes?

That’s right, olive oil can be used in place of corn oil when baking cakes, cookies, and other desserts.

It’s like everything that stems from veggies is good for you, right?

The same goes for vegetable oil.

This type of oil is extracted from plants and has a neutral taste, which is why it’s a common ingredient in baking recipes.

While it doesn’t have the same nutty flavor as corn oil, it does a great job at keeping baked goods moist.

Just like grandma used to make, butter is a natural and delicious alternative to corn oil in baking recipes.

Although it may not be as heart-healthy, the flavor and results are worth the extra calories.

When substituting butter for corn oil, use the same amount of butter as you would oil.

You may need to experiment a bit to get the right consistency, but in general, butter makes a great substitute for corn oil in baking.

Some of my favorite recipes for using butter instead of corn oil are:

This replacement isn’t as popular as others, but it will still get the job done.

Margarine is made from vegetable oils, so it contains a similar fat composition to corn oil.

This means it can be used as a 1:1 substitution in baking recipes.

The results may not be exactly the same, but your baked goods will still be delicious.

Here are some of my favorite recipes that use margarine:

Ghee is a class of clarified butter from India which has been traditionally used in Indian cooking.

It is made by simmering butter to evaporate all the water content, and then removing the solid milk solids that form at the bottom.

This leaves behind a pure butterfat that is shelf-stable and has a high smoke point, making it ideal for cooking.

Ghee has a rich, nutty flavor that can enhance the flavor of baked goods. It can be used in place of corn oil in most baking recipes.

When substituting ghee for oil, use the same amount of ghee as you would oil.

My favorite way to use ghee is in these delicious Chocolate Chip Walnut Cookies.

The ghee gives the cookies a rich flavor and a slightly crisp texture.

Shortening is an edible fat used to ‘shorten’ baked goods, meaning to make them crumblier.

It is made from either animal fats or vegetable oils.

This means that shortening will actually make your baked goods less dense and more moist than if you were to use corn oil.

I like to bake with shortening because it gives my baked goods a light and fluffy texture.

Shortening also has a higher smoke point than corn oil, meaning that it can withstand higher temperatures before starting to smoke and break down.

This is especially important when baking at high temperatures, such as when making pies or pastries.

You’ve probably also heard of lard before as a baking ingredient.

Lard is a type of fat that comes from pigs.

It’s solid at room temperature but melts quickly when heated up.

Lard can be used in baking recipes as a substitute for corn oil.

The main reason why you might want to use lard instead of corn oil is that it gives baked goods a richer flavor.

Lard is also less likely to cause your baked goods to become dry or crumbly.

I love peanuts, so I figured why not try peanut oil in baking.

Turns out it’s a great alternative to corn oil.

Peanut oil has a higher smoke point, so it’s great for frying.

And it gives baked goods a nice nutty flavor.

Some of my favorite recipes that use peanut oil are my grandmother’s peanut butter cookies and my mom’s chocolate chip cookies.

Have you tried cooking with grapeseed oil?

This versatile oil can also be used as a substitute for corn oil in baking recipes.

Grapeseed oil has a high smoke point, which makes it ideal for cooking at high temperatures.

This oil is also light in flavor and won’t overpower your baked goods.

Canola oil is a healthy alternative to corn oil.

It is high in monounsaturated fat and is recognized as safe.

Canola oil is a good choice for baking because it is low in saturated fat and has a high smoke point.

My favorite recipes that use canola oil are cakes, cookies, and quick breads. 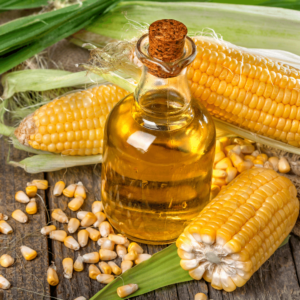 12 Substitutes for Corn Oil in Baking

We know that corn oil is a staple in your kitchen. It's versatile, it's delicious, and it's easy to find. But you might be surprised to learn that there are some other options out there!
Print Recipe Pin Recipe
Prep Time 1 min
Cook Time 1 min
Total Time 2 mins
Course Baking
Cuisine American
Servings 4 people
Calories 700 kcal