Raisins are a great snack or ingredient for baking.

They’re packed with antioxidants, fiber, and other nutrients that make them an excellent addition to any diet.

That’s why it can be helpful to know of good substitutes for raisins so that you can still enjoy your recipes without compromising on flavor.

In this article, I will share 8 of the best substitutes for raisins so that you never have to go without your favorite dishes!

Raisins are dried grapes with a chewy texture and sweet taste, making them a popular snack food as well as an ingredient in many desserts.

They are made by drying out ripe grapes either naturally in the sun or artificially using dehydrators.

The dehydration process concentrates the natural sweetness of the grape into the small raisin form, which is why they can be so sweet.

In addition to their deliciousness, raisins also have a long shelf life because of their lack of water content – making them an easy-to-store pantry staple.

Raisins are most commonly used as a topping for oatmeal or yogurt, but they can also be added to breads like banana bread and cookies for extra flavor and texture.

They can even be rehydrated for use in recipes like curries and pilafs.

The 8 Best Substitutes For Raisins

Raisins are a popular ingredient in many recipes, but they can be hard to find or expensive.

Fortunately, there are several substitutes that will provide similar sweetness and texture.

Here are eight of the best alternatives:

Dried currants are small raisins with a sweet and tart flavor.

They are cultivated from a variety of black grapes and have an earthy yet slightly tangy taste.

Many cooks like to use them in desserts and snacks or as an ingredient in cooked dishes, salads, and sauces.

A single tablespoon of dried currants has 16 calories, and is rich in antioxidants, fiber, and vitamin C, so it’s worth considering them as a substitute for raisins when you’re looking for something other than regular raisins.

Dried currants can be used in baked goods such as muffins and scones instead of the traditional raisin fillings.

Use about 1 tablespoon per cup of flour for thoroughly mixed sweetness throughout your batter.

You can also add them to overnight oats or your morning cereal bowl or yogurt parfait for added texture and sweetness without all the added sugar from traditional sugary breakfast staples!

When cooking savory dishes such as lentils stews or stir-fries, try adding ½ teaspoon per serving of dried currants to give your dish some additional depth and interest while still keeping it healthy too!

Dried sweetened cranberries can be used as a substitute for raisins as they have a similar taste and texture.

Dried sweetened cranberries are made with fresh cranberries that are dried in sugar syrup to give them their sweetness.

They are also chewy, bright red-colored berries that make the perfect addition to any healthy snack or dessert recipe.

They can lend flavor and texture to oatmeal cookies, muffins, granola bars and fruit salads while providing antioxidants along with other vitamins and minerals.

In baked goods, replacing the same amount of raisins with dried sweetened cranberries will give you an added tartness thanks to the tartness of the originally used fruit from which it is derived from.

The combination of these flavors makes them really tasty in breakfast recipes like pancakes or waffles where you can top these treats off with some yogurt for extra creaminess and crunch!

You can even mix some coconut flakes into your favorite smoothies or shakes to get a more festive flavor.

Dried cherries are a great alternative to raisins for adding flavor and texture to recipes.

They’re sweet and tart and have a chewy texture that adds interest when combined with other ingredients.

They can be used in both savory and sweet dishes, ranging from cereals, oatmeal, muffins, breads, salads, side dishes like couscous or quinoa pilafs, main courses such as pork chops or roasted chicken with dried cherry sauces, desserts such as pies or puddings with dried cherries mixed in.

Using dried cherries instead of raisins is also a creative way of changing up the flavor profile to give any recipe an extra boost!

To substitute raisins 1:1 with dried cherries may require some adjustment depending on the recipe; usually, you’ll need less due to their sweeter taste.

You may need up to twice the amount of sugar if using lighter-colored ones because those tend to be milder in sweetness than darker varieties.

When cooking savory food that has strong flavors like onions, Italian spices or garlic it’s best to use darker-colored (tart) versions rather than light-colored (sweet).

Also experiment by combining different types together for unique combinations of flavors!

Dates, pitted and minced, can be a great substitute for raisins in recipes. Dates are dried fruits of the date palm tree that have a sweet taste similar to that of raisins.

They come in various sizes and colors but generally resemble small brown bodies with wrinkled skins.

When using dates as an alternative to raisins, you’ll want to peel them first and then mince them up so they can better fit into your dish.

Mincing will help break down the chewy exterior, allowing it to blend better with any other ingredients or liquids used in the recipe.

Dates work best when cooked or heated along with any other ingredients due their firmness.

This could mean adding them towards the end of cooking processes like baking or stewing; however, if you do heat your dates too quickly they may burn so it’s important to stick close by while these processes are happening!

To make sure your date pieces are finely chopped enough add some almond flour during this process; this should give everything a smoother texture while also helping bind all components together nicely once served up!

Plus, it won’t affect the sweetness-factor either since there’s hardly anything inside dates except natural sugars anyways – no matter how much honey candy my mother rants about:)

An example would be to use dates instead of raisins in oatmeal cookies.

Start by peeling and mincing the dates, then add the almond flour to help bind them together.

Finally, mix the minced dates with the other dry ingredients before adding the wet ingredients and baking as usual.

The dates will add sweetness and texture to the cookies and make them a bit healthier than using raisins.

Prunes are a great alternative to raisins for recipes that need an intense sweetness with a bit of tangy flavor.

Prunes are made from dried plums and have the same properties as raisins, but they offer a richer taste profile and contain more nutrients.

Minced prunes can be used in baking recipes such as pies, muffins, cakes, breads, etc., to replace raisins or any other dried fruit.

To use minced prunes in your recipe instead of raisins you would have to adjust the amount used since they have a much higher sugar content than standard raisins.

Start off by adding half the amount of diced prunes than regular-sized raisins called for in the recipe then add more if desired.

For example: For every 1/3 cup of standard-sized raisin called for you could use 1/6 cup (or less) of minced prunes in its place.

Likewise, if your recipe calls for 2 cups large seedless grapes it may work best to substitute with 3/4 – 1 cup diced pitted prune pieces per two cups grape equivalents where taste is concerned depending on preference strengthwise against all the other ingredients present already.

Dried apricots, minced, can be used instead of raisins when you are looking to add sweetness and texture to a recipe.

Minced dried apricots blend in really well with baked goods such as cookies and cakes for that extra sweetness and moisture.

Dried apricots also work great in savory dishes as they have both sweet and sour flavors.

Try adding some to your favorite dishes like stir fries or curries for an unexpected flavor kick.

Mincing the dried fruit makes it easier to mix together with dry ingredients without crumbling too much; then just treat them almost like you would with raisins!

You can use anywhere from one-quarter cup up to 1 cup of minced dried apricot in place of 1/4-1 cup of raisins depending on how much fruitiness you want in your dish.

Figs are a type of dried fruit that makes an excellent alternative to raisins.

They are sweet and contain the same amount of carbohydrates per serving as raisins, so they can be used in desserts and other recipes at the same rate.

Figs also provide a subtle hint of pepper or licorice undertones which is not present with raisins.

Toppings for breakfast cereals or yogurt, cookies, pastries, muffins and cobblers all benefit from using diced figs instead of raisins.

For instance, you can sprinkle some minced figs on top of your morning oatmeal bowl or stir it into baked good recipes such as cakes, coffee cakes, puddings and energy bars.

You may need to adjust the overall sweetness levels depending on how you prefer the final result since figs have more sugar than raisins do by weight.

Goji berries are another great alternative to raisins if you’re looking for something a bit more exotic.

Goji berries have a sweet and slightly tart flavor, and they’re surprisingly juicy given their small size.

You can use goji berries in recipes that call for raisins without any need to adjust the quantity, as one tablespoon of each weighs about the same amount.

Their mild flavor goes well with many savory dishes like salads or curries as well as sweet treats such as cakes and cookies.

So now that you know the 8 best substitutes, you can easily enjoy all of your favorite recipes without compromising on flavor or texture.

Whether you’re looking for a tart or sweet alternative, there is a dried fruit out there for you.

Dried currants, sweetened cranberries, cherries, dates, prunes, apricots, figs, and goji berries are all excellent substitutes for raisins that will make your meals and snacks that much more enjoyable. 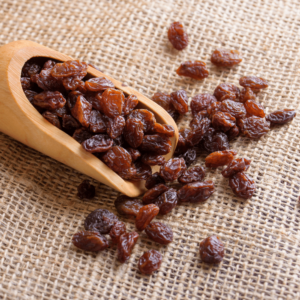 The 8 Best Substitutes For Raisins

What if you're out of raisins and need a substitute? Well, I'm here to help! In this article, I'm sharing my top 8 substitutes for raisins. From dried cranberries and dried cherries to dried currants and dates, you'll find something that fits your needs here. I'll provide a brief overview of each one, as well as how to use them properly in place of raisins. Whether you're baking a cake or making a salad, you'll find something here that'll work perfectly!
Print Recipe Pin Recipe
Prep Time 5 mins
Cook Time 5 mins
Total Time 10 mins
Course Substitutes
Cuisine American
Servings 4 people
Calories 357 kcal