Corn syrup is one of the most commonly used ingredients in candy making.

It adds sweetness, but it also contributes to the texture and consistency of your finished product.

The problem is that corn syrup is made from corn—which many people are allergic to, or just don’t want to eat.

What can you use instead?

Below is a list of 8 substitutes for corn syrup in candy making that will make all your sweet tooth dreams come true!

Corn syrup is a common ingredient in candy, but not everyone can eat it.

Luckily, there are some great alternatives that work just as well!

Here are 8 substitutes for corn syrup in candy making:

My favorite substitute for corn syrup in candy making is honey.

Honey is a sweet, sticky liquid made by bees using the nectar from flowers.

It’s used in baking and cooking as well as being spread on bread or toast.

Honey has the same consistency as corn syrup and similar sweetness.

It can be used to make caramel, fudge, pralines, chocolate-coated nuts and fruits, chocolate bars, and brittle.

Honey can also be used to make marshmallows and fondant or to glaze baked goods like doughnuts.

Most recipes that call for honey should have an equivalent amount of honey substituted for corn syrup unless you’re making caramel, in which case you should use 2/3 cup of honey for every cup of corn syrup called for in the recipe.

Maple syrup is another great substitute.

It’s liquid at room temperature, and it has a similar consistency and sweetness to corn syrup.

You can get maple syrup at most grocery stores, although some varieties might be more expensive than others.

You’ll need to use less than half as much as you would with corn syrup—so if a recipe calls for 1 cup of corn syrup, then use only 0.25 cup of maple syrup instead—because maple syrup tends to be much sweeter than corn syrup.

This sweetener is one of the most popular syrup substitutes due to its versatility and neutrality.

It comes in light and dark varieties, which can be used interchangeably (although darker agave has a more intense flavor).

It’s important to note that agave nectar will not crystallize like corn syrup can.

That’s fine for recipes that don’t call for hard candy, but if you’re looking for something with a similar texture to corn syrup, this probably isn’t it.

Sorghum syrup has the same consistency as corn syrup, and it’s actually super sweet too—it has a sweeter taste than sugar!

You can use it to replace corn syrup in candy recipes one to one—just swap out the same amount of sorghum syrup as you would have used corn syrup.

The only drawback is that sorghum isn’t as readily available as corn syrup, so you might have to make a special trip to get it.

But if you’re looking for something less processed than corn syrup to sweeten your candy with, this is definitely worth the extra effort.

Rice syrup is a great substitute for corn syrup because it serves the same purpose.

It helps prevent crystallization in candy and gives it a smooth, glossy look that makes it easy to eat.

The key is to get rice syrup with at least 55% maltose, 24% glucose and 20% maltotriose or higher.

Rice syrup with this ratio will work just as well as corn syrup does in candy making.

One of the most popular substitutes for corn syrup is date sugar or date syrup.

These are made from dates—obviously—which are a fruit that comes from the Middle East.

They’re rich in potassium, iron, magnesium and more, which makes them a pretty healthy food.

They also taste amazing (at least in my opinion), but that’s beside the point.

When you use date sugar or date syrup in place of corn syrup, you can enjoy your favorite treats without all the added calories and health risks associated with corn syrup.

Plus, you can feel good about eating something that actually provides some nutritional value!

If you’re looking for a substitute for corn syrup in candy making, try golden syrup.

It’s made from sugarcane, so it has that familiar sweet taste that corn syrup has, but it’s also super-thick, which makes it perfect for candy.

It’s one of the most popular substitutes because you don’t need to make any major adjustments to the recipe when you switch out corn syrup for golden syrup.

The only thing you need to watch out for is that it’s made from sugarcane, not sugar beets like most sugar here in the US is.

That might not seem like a big deal, but if you’re cooking with golden syrup and your other ingredients are made with beet sugar, they have different molecular structures and will react differently during the cooking process.

Molasses may not be something you have in your pantry already, but it’s very common in baking and cooking, so you may have used it before.

Molasses has a lot of the same properties as corn syrup, so it’s a great alternative.

It tastes good and works well in many recipes. 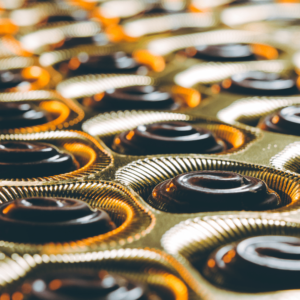 Corn syrup is an important ingredient in candy making. It helps keep your candy from crystallizing and gives it a smooth, glossy shine. However, you may be concerned about using corn syrup in your candy. If so, don't worry! There are plenty of great substitutes for corn syrup that will do the trick just as well as the real thing.For example, if you are looking for something a little more natural than corn syrup to use in your next batch of peanut brittle or toffee, try honey instead! Honey has many of the same properties as corn syrup (it's sweet and sticky) but is much healthier for you since it's an all-natural product with no artificial ingredients added in. Plus, it tastes better too!Another good substitute would be molasses from sugar cane plants which also has some similar properties but doesn't contain any high fructose content like what's found in regular corn syrup. You could also use agave nectar as well since this sweetener comes from plants like sugar cane or maple trees rather than being derived artificially through industrial processes like those required when making high fructose corn syrups.
Print Recipe Pin Recipe
Prep Time 5 mins
Cook Time 5 mins
Total Time 10 mins
Course Dessert
Cuisine American
Servings 4 people
Calories 188 kcal