Getting ready for the holidays means you’re probably baking a pie or two, and if you’re using a traditional pecan pie recipe, chances are it calls for corn syrup.

But what if you don’t have any on hand, or you’re looking for a healthier alternative?

If you don’t want to use corn syrup in pecan pie, you can substitute with honey. Honey has a lower glycemic index than corn syrup, which means that it doesn’t spike your blood sugar levels as much.

But of course, there are many other alternatives…

Pumpkin pie’s okay, and apple pie is pretty great, but nothing can ever beat the sweet, golden deliciousness of pecan pie.

It’s just something about that corn syrup that makes it so much better than any other pie out there.

Okay, okay—so maybe you’re like us and don’t want to consume the high fructose corn syrup in your pecan pie.

Here are 15 substitutes for corn syrup in pecan pie that you should try if you want a healthier (and still totally delicious) version of this beloved dessert:

Honey has a more complex flavor that can bring out different notes in the filling, and you can use less of it.

This is because honey is sweeter than corn syrup.

The most common mistake people make when using honey as a substitute is to use too much of it.

You should only use half as much as the amount of corn syrup called for in your recipe.

Maple syrup is suitable because it has a similar consistency, sweetness, and color to corn syrup.

Maple syrup is best suited for recipes that call for light corn syrup.

If you decide to try this substitute, keep in mind that maple syrup has a distinct flavor that will come through in your recipe.

If you don’t want maple flavor in your pecan pie, this substitute may not be for you.

When using maple syrup as a substitute for corn syrup, some people also suggest increasing the baking time by 10-20 minutes because it takes more time for the pie to set.

The best thing about light molasses is that it not only has the texture and color to match up with corn syrup, but also has a similar caramel-like flavor, making the substitution seamless.

But really, that’s just a matter of taste!

Dark molasses is a great substitute for corn syrup in pecan pie because it’s similar in flavor and consistency, but with a slightly more bitter edge.

However, you’ll want to be sure to use unsulfured molasses, which is the most common variety readily available on shelves.

A common mistake people make when using dark molasses as a substitute for corn syrup is assuming that all kinds of molasses are created equal.

Blackstrap molasses, for example, has an extremely strong flavor and will overpower your pecan pie.

It also has a much thicker consistency which may ruin the texture of your filling.

Stick with unsulfured molasses for the best results!

Sugar is a suitable substitute for corn syrup because it’s sweet, but it’s not as thick, so you’ll need to use more than the recipe calls for.

When using sugar in pecan pie, make sure to use a lot more than your recipe calls for.

If you don’t increase the amount of sugar, your pecan pie might not be as sweet as you’d like.

Another common mistake people make with this substitute is to not adjust the oven temperature, which can cause your pie to burn or not cook through properly.

Brown sugar is a simple substitute that can be used 1:1 in place of corn syrup.

Brown sugar is slightly acidic, and this means it will interact with the other ingredients in the same way as corn syrup, helping to create a smooth texture and preventing crystallization.

However, using brown sugar instead of corn syrup gives the pecan pie a strong caramel flavor, which some find overpowering.

To avoid this, you can reduce the amount of brown sugar by 25%-50%, and replace it with an equal amount of molasses or honey.

This will help to keep the sweet flavor and texture similar to what you’d get from corn syrup, but without the strong flavor of caramel.

The main difference between golden syrup and corn syrup is that golden syrup has been cooked for longer than corn syrup, so it has a very dark color and a heavy molasses taste.

This means you may want to cut back a little on the sugar you add to your pecan pie if you’re planning on using golden syrup as your substitute.

One mistake people often make when they’re substituting golden syrup for corn syrup is adding too much flour or cornstarch to their recipe.

These ingredients are used to help give pecan pie its gooey texture, but they can also ruin the taste by making your pie too “gloopy.”

Agave nectar has a similar sweetness, without the stickiness of corn syrup, so you don’t have to worry about it making your pie soggy.

One of the most common mistakes people make with this substitute is adding too much of it—they’re used to the stickiness of corn syrup, and so they just end up with a much sweeter pie than they meant to!

You can avoid this by mixing your agave nectar with water before adding it to your recipe.

For every 1/4 cup of agave nectar, use 3 tablespoons of water!

It provides the thick consistency of corn syrup without altering the flavor of your dish—and on top of that, it’s a healthier alternative!

You can even use it in recipes that call for honey or maple syrup.

If you’ve never cooked with brown rice syrup before, there are some common mistakes people tend to make when using it.

The most important thing to remember is that although you can find brown rice syrup in the baking aisle of the store, it’s not like normal baking ingredients.

Brown rice syrup should be added to pecan pie filling at room temperature or else it will harden and crystallize, which means your delicious pie will come out with a gritty texture instead of being smooth and gooey.

Malt syrup is a suitable substitute for this pie because it has a similar consistency and a sweet taste that complements the other ingredients of the pie.

It also helps to bind the other ingredients in the pie together.

However, malt syrup isn’t exactly like corn syrup—it’s more viscous, which means you’ll want to reduce the amount of other liquid ingredients when using it.

In addition, you might want to cut back on the sugar in your recipe as well, since malt syrup is sweeter than corn syrup.

Now, you might be thinking that pecan pie without corn syrup is a crime punishable by life in prison.

But trust me—the right substitute will have your guests swearing they can’t tell the difference.

I know what you’re thinking: “Date who?”

Date paste is exactly what it sounds like: a paste made from dates.

This ingredient is naturally sweet, and it binds incredibly well with the other ingredients, making it a great choice for substituting corn syrup in pecan pie.

You can find date paste at most grocery stores or make your own at home by soaking dates in water, then blending them into a smooth mixture.

One thing to watch out for with date paste is that it’s extremely sticky, so be sure to keep things clean as you work with it.

If you don’t, the baking process will be a nightmare, and this pie will go to waste before getting anywhere near your guests.

Barley malt syrup has a richer and more complex flavor than corn syrup — which might be just the thing to help you stand out from the crowd at your next holiday party.

One common mistake people make with barley malt syrup is using too much.

A little goes a long way, so try using a bit less than you think you’ll need and then add more if necessary.

If you’re looking for a substitute for corn syrup in pecan pie, sorghum syrup is a great choice.

Sorghum syrup is a naturally sweet syrup that comes from the sorghum plant—a type of grass.

It’s most popular in the southern United States, where it’s been used as a sweetener and additive to foods like bread and barbecue sauce.

Though it looks like molasses, it has a lighter color and more neutral taste than molasses or dark corn syrups.

A common mistake people make with this substitute is they don’t account for the increase in sweetness and use too much sorghum syrup in their pie filling.

If you’re looking for a suitable substitute for corn syrup in pecan pie, coconut nectar is an excellent choice.

Coconut nectar is a thick, sweet liquid made from the boiled-down sap of coconut palm trees.

It’s very similar to maple syrup or molasses in terms of taste and consistency, but it has less sugar.

Because it’s so thick, it’s great for adding body to your pie filling and making it a little more decadent.

A common mistake people make when using coconut nectar as a substitute for corn syrup is using too much.

Coconut nectar is quite sweet, so you don’t need to use as much—usually half the amount will be fine.

If you find that your pie filling isn’t coming together as well as you’d like, add just a bit more at a time until you get the texture you’re going for.

Caramelized white sugar has a similar amount of sweetness and density as corn syrup, making it a suitable substitution for the latter.

How to Pick A Substitute for Corn Syrup in Pecan Pie

To pick the right substitute for corn syrup, you should consider its purpose in your recipe.

If you are looking for a substitution that will maintain the gooey consistency of your pecan pie without adding any additional sugar, you could use molasses or dark honey.

If you don’t mind replacing the sweetness that corn syrup contributes with another sweetener, try substituting with golden syrup or brown rice syrup. 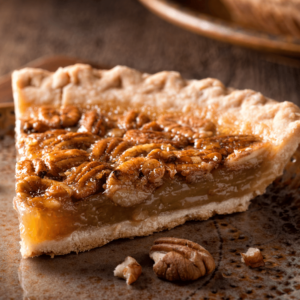 Pecan pie is the perfect dessert to make when you're having guests over during the holidays or if you just want a sweet treat to have at home. But what if you ran out of corn syrup, or didn't feel like using it? It's easy!Whether you're looking for something a little less sweet or a little more natural than corn syrup, there's an alternative that meets your needs.
Print Recipe Pin Recipe
Prep Time 5 mins
Cook Time 5 mins
Total Time 10 mins
Course Dessert
Cuisine American
Servings 4 people
Calories 250 kcal