Do you love the flavor of dill pickles?

Whether it’s a crunchy snack or an addition to your favorite sandwich, there’s nothing like the unique taste of dill.

But what if you want to give your homemade pickles a little something extra?

Herbs and spices are a great way to add some variety and complexity to your pickles.

In this article, I will discuss 8 herbs and spices that work particularly well with dill pickles.

From classic combinations like garlic and onion powder to more adventurous flavors like turmeric and cardamom, these seasonings can take your pickle game up a notch!

What Are Dill Pickles?

Dill pickles are cucumbers that have been preserved in a brine solution of vinegar, water, salt, and dill.

The combination of these ingredients creates a sour flavor with hints of sweetness and spice.

Dill pickles can be eaten as-is or used to add flavor to sandwiches, salads, burgers, and other dishes.

The process for making dill pickles begins by selecting the freshest cucumbers available.

These are then washed thoroughly before being placed into jars along with fresh dill sprigs and garlic cloves.

This mixture is heated until the sugar has dissolved before it is poured over the cucumbers in the jar.

The jar is sealed tightly and left at room temperature for several days so that the flavors can develop fully before refrigerating them for up to two months.

Dill pickles make an excellent snack on their own or they can be used as an ingredient in many recipes such as potato salad or tuna salad sandwiches.

They also pair well with cheese slices on crackers or added to hamburgers for extra crunchy texture and flavor!

If you’re looking to make homemade dill pickles, the right combination of herbs and spices is essential.

Here are eight herbs and spices that will add a unique flavor to your pickles:

Dill is an herb that belongs to the same family as parsley, celery, and carrots.

It has a unique flavor that is both sweet and savory with hints of citrus.

The leaves are feathery and delicate in texture while the seeds have a more intense flavor.

Both the leaves and seeds can be used for cooking, but they should be added at different times during the cooking process to get the most out of their flavors.

Garlic powder is a seasoning made from dehydrated garlic that has been ground into a fine powder.

It can be used as an alternative to fresh garlic in recipes and adds a milder, more subtle flavor than fresh garlic.

All parts of the mustard plant are edible, including the seeds, leaves, and flowers; it is in the same genus as cabbage and turnips and is an annual plant.

There are over 40 different varieties of mustard plants, but three are the most popular for culinary use; black, brown, and white mustard seeds typically go into recipes and making mustard.

All three varieties are found in the U.S. as well as other parts of the world.

Coriander is an herb that comes from the same plant as cilantro.

It’s a member of the parsley family and has a mild, lemony flavor.

The seeds are used in cooking, while the leaves are often used as a garnish or to add flavor to salads and other dishes.

Black peppercorns are the dried, unripe fruit of a flowering vine in the Piperaceae family.

They are native to India and have been used as a spice for thousands of years.

The flavor is pungent and slightly spicy, with a hint of sweetness.

Fennel seeds are the dried fruit of the fennel plant, an herb in the carrot family.

The seeds have a sweet, licorice-like flavor and aroma that is often used to season dishes like fish, salads, and soups.

Fennel seed has been used for centuries as a medicinal herb to treat digestive issues such as gas and bloating.

Onion powder is a seasoning made from dried, ground onions.

It has a strong onion flavor and aroma, and it can be used to add flavor to many dishes without the hassle of chopping or slicing fresh onions.

Red pepper flakes are made from dried and crushed red chili peppers.

They have a bright, spicy flavor that can add a kick to any dish.

The heat level of the flakes varies depending on the type of pepper used and how much of it is included in the mix.

In conclusion, there are many herbs and spices that can be used to give your dill pickles a unique flavor and aroma.

Using a combination of these herbs and spices can help to create a delicious and unique flavor that will make your pickles stand out from the rest.

So, the next time you’re making dill pickles, don’t forget to add some of these flavorful and aromatic herbs and spices to give them an extra kick. 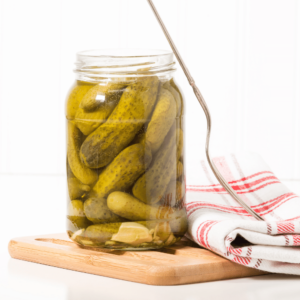 I'm a huge fan of pickles, and I'm always looking for ways to make them even better. In this article, I'm sharing my top 8 herbs and spices to use when making dill pickles. I'll provide a brief overview of each one, as well as how to use them properly and how to combine them for maximum flavor. Whether you're a novice pickler or an experienced pickling master, these tips will help you create pickles that are packed with flavor!
Print Recipe Pin Recipe
Prep Time 5 mins
Cook Time 5 mins
Total Time 10 mins
Course Herbs, Spices
Cuisine American
Servings 4 people
Calories 10 kcal Jenny has always been passionate about cooking, and she uses her platform to share her joy of food with others. Her recipes are easy to follow, and she loves giving tips and tricks to help others create their own unique culinary creations.