Do you ever find yourself in the kitchen, halfway through a recipe, only to realize that you’re missing an essential ingredient?

It can be frustrating – especially when it comes to bay leaf.

Bay leaves are a popular herb used in many dishes, but they can be hard to come by if you don’t have access to fresh or dried ones.

Fortunately, there are several substitutes for bay leaf that will give your dishes the same flavor and aroma without having to go searching for the real thing.

Here is a list of eight of the best substitutes for bay leaf so that you never have to worry about being caught without this important ingredient again!

What is Bay Leaf?

Bay leaf is a perennial herb commonly used as an aromatic spice in cooking.

It has a fragrant smell and its leaves are used whole to enhance the flavor of soups, stews, marinades and other savory dishes.

Bay leaves have been used medicinally for centuries by many cultures around the world; traditionally they have been thought to reduce inflammation, treat infections as well as provide relief from digestive issues such as nausea or indigestion.

When cooked with food, it comes mainly in two forms – fresh or dried bay leaves which can be added to any dish while cooking but should always be removed before consumption due to their bitter taste when eaten raw.

No matter what type you choose, using them delicately with your favorite seasoning will give your dishes an added boost of flavor!

The 8 Best Substitutes For Bay Leaf

Bay leaves are a common ingredient in many recipes, but they can be hard to find.

If you don’t have any on hand or if you’re looking for an alternative, there are several great substitutes available.

Here are eight of the best bay leaf substitutes that you can use in your cooking:

Basil is a hugely popular herb known for its sweet, spicy-hot flavor.

It comes from the mint family and packs a strong punch of pungency!

Basil is usually used in Italian cooking, but it can be used in many other cuisines as well.

It’s best when you use fresh basil leaves to get that unique taste and aroma but it’s also available dried if preferred.

One warning: too much dried basil will overpower your dish with its strong flavor so start sparingly.

When using fresh basil leaves, wash them first before adding it to dishes raw or cooked.

Adding them at the end of cooking will ensure you don’t lose any fragrance or flavoring agents due to heat destruction during the cooking process.

If you are looking for an easy replacement for bay leaf then look no further than basil! Dried or powdered bits work great in soups, stews, and casseroles.

Dried thyme is a powerful herb that can be used to add flavor and aroma to dishes.

It has an earthy, slightly peppery taste with herbal undertones.

When using dried thyme, it’s important to remember that the leaves are much more concentrated than fresh ones so you should use about one-half teaspoon of dried for every teaspoon of fresh.

The best way to store this ingredient is in a tightly sealed glass container at room temperature as its flavor quickly fades away over time when exposed to air light or moisture.

In place of bay leaf, you should increase the amount of dried thyme by 2-3 times depending on how strong the desired flavor will be.

It works especially well in soups or stews and pairs nicely with other herbs like oregano and basil.

To get the most out of it, add it towards the end of your cooking as its taste will be more pronounced.

Oregano is a staple in many dishes, particularly Italian and Mediterranean cuisines.

It is an aromatic herb with a fragrant mint-like aroma that is often used dried, but it tastes the best when fresh.

In its fresh form, it has small sharp leaves of green to light brown color and sweet pungent flavor which intensifies during drying.

Oregano has been used as both a culinary and health supplement for thousands of years – especially by the Greeks and Romans – as it was believed to have therapeutic properties such as Fortifying general weakness or treating infections.

Oregano possesses antiseptic and antioxidant qualities so not only does it contribute greatly to the taste of various dishes, it also offers numerous health benefits too!

To use oregano instead of bay leaf you should replace each bay leaf with ⅛ teaspoon of crumbled dried oregano – a little goes a long way.

To substitute fresh oregano, use three times the amount of dried oregano.

When using oregano, add it during the last 10 minutes of cooking to retain its flavor.

Juniper Berries are a type of spice used in various cuisine.

They have a mildly sweet and sour aroma and taste like a hint of pine and citrus.

Juniper Berries come both fresh or dried, but they can also be found as an essential oil or ground powder.

When it comes to culinary uses for Juniper berries you’re in luck! You’ll usually find them in marinades for fish dishes especially those wrapped tin foil packets on your favorite camping trips!

It’s commonly used to season pork roasts; make game dishes; infuse sauces; use with root vegetables such as carrots potatoes onions & beets; and even put into jams and jellies.

Boldo leaves have an earthy, minty flavor and aroma that is similar to bay leaves.

They originate from South America and grow in Chile, Ecuador, Colombia, Peru, Uruguay and Argentina.

They are used extensively in Latin American cooking for centuries as a seasoning or herb.

The bright green boldo leaf has the appearance of a large pine needle.

In the culinary world they can be used fresh or dry but dry is more common and it’s preferable when adding them directly to dishes such as soups, stews, sauces or other slow-cooked recipes.

When you purchase boldo leaves they will likely already be dried – if fresh -chop off small pieces before adding them so that the flavors are released gradually during cooking time.

Boldo leaves help bring out certain flavors and tend to dissipate after about 30 minutes of simmering which means you should add them near the beginning of cooking processes like stewing or braising something like pork shoulder roasts or beef briskets where there’s plenty of time for the flavors to come through well without overwhelming your dish with too much flavorings at once.

Parsley is a fragrant herb with many uses in cooking.

While it’s best fresh, you can also get it dried for a more intense flavor.

Aside from being nutritious, parsley adds undeniable flavor to dishes such as soups, stews and salads.

You can even use the stems of this herb while making stocks or simmering sauces because they are packed with powerful aromatics oils that enhance any dish’s flavor profiles.

Parsley is also incredibly versatile – you can serve parsley at its own side dish or add its leaves or sprigs to fish and other meats when roasting or grilling them.

One reason why parsley can be used instead of bay leaf is that both herbs bring out subtle flavors in dishes without overwhelming other ones; but most importantly, there’s no bitter taste when using either of them!

Lastly, since there isn’t much difference between the two, you can use whichever one you have on hand.

Savory is a wonderful herb and great addition to many dishes.

This ingredient has a lightly peppery flavor adding an extra layer of complexity and depth to your cooking.

From dishes such as soups and stews, to even vinaigrette or salad dressings, savory can be used in every type of cuisine.

Because it is quite similar in flavor profile to bay leaf, you can use this herb instead when you need something that won’t overpower the dish like bay leaf often does.

Savory will also work well in most recipes that call for oregano thanks to its subtle taste yet powerful aroma.

It pairs very nicely with meats and vegetables alike due to its fresh but still slightly earthy flavors.

All in all, savory brings excellent flavor no matter which dish it might be added into, making it a suitable replacement for other herbs such as bay leaves or oregano where desired!

Marjoram is an herb that belongs to the same family as oregano and thyme.

Typically used more in Mediterranean cooking styles, this ingredient has a unique flavor that is great for adding depth and nuance to your dishes.

The leaves are a great way to add flavor without calories or fat, as it’s usually just added whole into stews or stocks.

This can be helpful if you’re trying to make healthier meals while still creating complex flavors!

Because of its sweet smell with sharp notes of pine and citrus, marjoram pairs well with vegetables, eggs and fish dishes.

In terms of cooking techniques, marjoram has one major benefit: unlike bay leaf which needs to be cooked long before eating since it’s too hard when raw – marjoram leaves are softer which means they can be added right near the end of cooking time so that the maximum amount of flavor will stay intact! 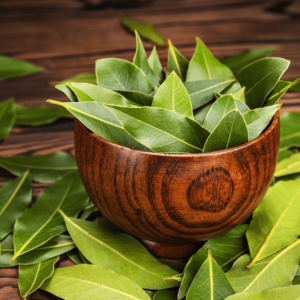 The 8 Best Substitutes For Bay Leaf

If you're out of bay leaves or simply want to try something new, this article is for you! I'm here to share my top 8 substitutes for bay leaf, so you can keep creating delicious dishes without missing a beat. I'll provide an introduction to each one, plus tips on the best way to use them. So, if you're ready to expand your spice cabinet and give your meals an extra kick of flavor, let's get started!
Print Recipe Pin Recipe
Prep Time 5 mins
Cook Time 5 mins
Total Time 10 mins
Course Substitutes
Cuisine American
Servings 4 people
Calories 44 kcal