The only thing that can make it better?

It might seem like finding meat that works well with your baked potato recipes is super easy—it’s just meat, right?

But you’d be surprised at all of the ways you can go wrong, and end up with a bland or overly salty dish.

In this blog post, we’re going to walk you through some of the best meats for your baked potato recipes.

Follow these tips to take your culinary masterpieces to the next level!

What Meats Go with Baked Potatoes?

What’s better than a baked potato?

But if you want to make your spud stand out, you’ll need to pick the right meaty complement.

Below is a list of the best meats to pair with your baked potato recipes, so grab your oven mitts and get ready to WOW when dinner’s done!

Beef is a great choice for a baked potato because it has strong flavor and pairs well with the mild flavor of the potato.

The best way to cook your beef is by using high heat on both sides until browned, then adding water or stock (about 1/2 cup) and allowing it to simmer until done.

This will give you nice tender meat that’s not too dry or tough.

Chicken is a versatile option for your baked potato recipes, as it can be prepared in many different ways depending on what kind of flavor profile you’re looking for!

You can roast whole chickens or use different cuts like thighs and legs; both will work equally well here.

3. Lamb: For the Adventurous

If you want to try something new, lamb is an excellent option for a baked potato.

Lamb is a flavorful and juicy meat that goes well with spices such as cumin and rosemary (which are also great on potatoes).

It has a gamey flavor that not everyone likes but that pairs well with the savory flavor of potatoes.

Pork is the savory choice when it comes to pairing your baked potatoes with meat.

Whether you’re making a delicious chili or just want something juicy on your plate, pork has got you covered!

It’s a meat that can be cooked many different ways—from grilled over heat until crispy on both sides (or seared in olive oil).

The possibilities are endless!

5. Ham: For When You’re Feeling Fancy

Ham is a staple topping for baked potatoes, but it’s often overlooked in favor of more classic options like bacon or sausage.

Ham is a great choice because it’s sweet and savory—it can be cooked in different ways for different flavor profiles (like honey ham), and it has a rich history that dates back to the 1600s!

For best results, cook your ham with some rosemary, thyme, and garlic cloves in an oven at 350 degrees for about 30 minutes before serving on top of your baked potato.

Fish is another underused ingredient that is just begging to be added to your baked potatoes!

Use it with caution, however—too much fish will overpower your whole dish (and might make you not want to kiss your date).

Instead, go light on the fish, like with a little savory crab cake (or two) sprinkled on top of your potato.

Or if you’re looking for something slightly more filling, try adding in some seafood bisque!

7. Veal: For the Cultured Palette

Did someone say, “veal”? If you’re looking for a gamey, rich flavor that pairs perfectly with a baked potato, veal is the way to go.

This cut of meat is not widely known because it’s rarely served in restaurants outside of France or Italy—but it’s an excellent option for any home chef looking to change things up in the kitchen!

You’ve had turkey on Thanksgiving.

Why not try another bird?

Duck with a baked potato will give you that gamey flavor you’re looking for, but with a unique twist that’s sure to please even your most discerning dinner guests.

9. Bacon: It’s Bacon, What Are We Supposed To Say

Let’s be real here: bacon is one of the greatest things ever invented.

If you want to take your baked potato to the next level, top it with some crumbled bacon.

Ground turkey has all the flavor and versatility of regular turkey without the price tag.

That’s important because you’ll be using a lot of it—you’ll definitely want plenty of ground turkey (See also these Ground Turkey Noodle Recipes) on top of each of your potatoes!

Bison is a leaner and more nutrient-dense red meat than others, like beef.

It’s also significantly lower in fat than other options, meaning you can load up on the toppings without feeling guilty!

We recommend opting for bison if you want something that’s juicy and flavorful, but not overwhelmingly heavy.

If you’re serving this in the summer or at an outdoor event, it’s lighter enough to keep guests from feeling weighed down by the meal.

12. Pheasant: For an Unusual Twist on Poultry

Most of us aren’t used to having pheasant with our baked potato, but it’s a surprisingly versatile meat that pairs perfectly with the tangy sour cream and sharp cheddar cheese that you love to add to your baked potato recipes.

It’s a lean meat, so any type of pheasant will work in this recipe, although we recommend using wild pheasant if you can get it, and always check the label to make sure it’s antibiotic-free.

We love putting roasted vegetables on top of our baked potatoes, so try adding some sprigs of thyme or rosemary to enhance the flavor of your meal.

This type of meat has a strong flavor that goes well with richer and heavier sides like baked potatoes.

Goat is also very lean, so while it won’t exactly be a diet food, it will at least make you feel less guilty about having more than one helping of carbs.

14. Ostrich: A Flavor That Will Blow You Away

Some say it’s similar to beef, only with a slightly more gamey flavor.

One thing’s for sure: Ostrich has a texture that will blow your taste buds away.

For starters, how do you cook ostrich?

It’s pretty simple, really: You can bake it, grill it, roast it, or braise it in the oven on low heat.

If you want to make sure that your ostrich is cooked properly, it should register an internal temperature of 170° Fahrenheit on an instant-read thermometer.

15. Alligator: Something New for Your Taste Buds

A lot of people have never had alligator before.

If you’re new to this meat option, prepare yourself for an experience unlike any other.

We can’t describe it any better than our taste testers did—they said it was “somewhat familiar” and “reminiscent of chicken but with a sweet aftertaste.”

Venison is one of the most popular meats for hunting enthusiasts.

It has a distinct flavor that’s both smoky and sweet, and it works perfectly when paired with the creamy texture of a well-made baked potato.

On top of that, it’s leaner than most other types of meat—which means that it’s not only tasty but also healthy for you!

17. Elk: If You Want to Impress with A Meat That’s Both Tasty and Rare

Elk meat is hard to find in stores—but if you do come across it, then it’s well worth trying out!

Its rich, nutty flavor will complement any type of baked potato recipe beautifully, no matter whether you like yours stuffed with cheese or served up alongside chili.

So why not give this rare treat a chance?

Dove is one of those meats that has been around for centuries and still tastes great today.

It’s also affordable, easy to find, and versatile enough to pair with all kinds of different dishes, including potatoes!

If you’re looking for an inexpensive way to add some flavor into your meal or if you just want something new try out today then consider trying dove with your next batch of potatoes!

19. Quail: If You Want to Go European

Quail meat is a staple in European cooking, especially in France, Italy, and Spain.

It is often roasted with various herbs and spices before being served at formal dinners or special occasions such as weddings or funerals (for example).

In addition to being used for its meat, quail eggs are commonly eaten as well—either hard-boiled or fried!

20. Rabbit: Bringing Out Your Inner Thumper

There’s something about a rabbit that makes you want to eat it, and not in the same way as Bugs Bunny.

Rabbits have tender meat and are inexpensive, making it an ideal option for a large meal or potluck gathering.

You won’t believe how good rabbit goes with your baked potato!

Squirrel is a surprisingly delicious meat when cooked correctly, especially when paired with a freshly-baked potato.

Though squirrel is relatively easy to find, there are some extra steps involved in preparing it for cooking.

To prevent any unpleasant taste or texture, soak squirrel overnight in vinegar and water before cooking.

If you want to bring out the best flavor in it, marinate it overnight as well!

Turkey bacon is an excellent substitute for pork bacon, especially if you are looking to cut down on your saturated fat intake or just want to try a new taste.

Here’s how to prepare your turkey bacon:

23. Kangaroo: For a Uniquely Australian Flair

Kangaroo is a uniquely Australian take on the classic baked potato topping.

This lean red meat contains high amounts of protein and iron, so you can get plenty of health benefits without sacrificing flavor!

See also  What Herbs to Put in Spaghetti Bolognese: 8 Herbs and Spices

If you’re looking for something new and exciting, kangaroo meat might be just what you need!

The Pros and Cons of Serving Meats with Baked Potatoes

If you’ve ever wondered what the pros and cons of serving meats with baked potatoes are, then you’re in luck.

Below I’ll be going over some of the benefits and disadvantages of serving meats alongside your baked potatoes.

In a nutshell, the pros outweigh the cons. 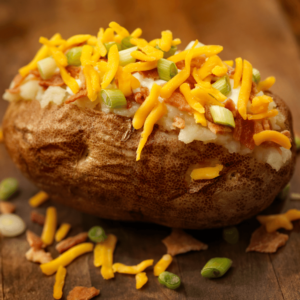 The importance of serving the right meat with baked potatoes cannot be stressed enough.There are a lot of factors that dictate what meat should be served with a baked potato. The first is the size of the potato. The larger the potato, the more meat you'll want to serve with it. For example, if you bake a small potato and top it with three strips of bacon, you won't likely feel full. If you bake a large potato and top it with three strips of bacon, you're going to feel satisfied but also probably be hungry again soon after. With this in mind, it's important to always consider the size of the potato before choosing your meat.Another factor is whether or not the potato has been stuffed with anything. If your baked potato has been stuffed with broccoli and cheese, for example, then it's best to avoid meats like chicken and sausage, as these will just overpower the flavor of whatever stuffing you've chosen to put inside your baked potato. Instead, opt for something more subtle like bacon or steak.
Print Recipe Pin Recipe
Prep Time 5 mins
Cook Time 5 mins
Total Time 10 mins
Course Main Course
Cuisine American
Servings 4 people
Calories 300 kcal