The main vegetable that goes well with Tikka Masala is cauliflower. It can be sauteed or grated and added to the curry. It also pairs well with potatoes and other vegetables like carrots, broccoli, and zucchini.

Tikka masala is a popular Indian curry dish with tender meat in a creamy curry sauce.

Not much taste can beat that, but I dare to mix up and change the profile of an already great dish.

In this article, I’ll share with you 15 vegetables that create amazing combinations with chicken tikka masala.

If you follow these tips, then your meal will be more delicious and healthier than before!

The perfect vegetables for tikka masala are cauliflower, green beans, asparagus, mushrooms, peas, and carrots. They all complement the flavors of the spices used to make this Indian curry dish.

There are many vegetables that are commonly used in the preparation of Tikka Masala.

These vegetables can be boiled and then used in the preparation of masala or they can be cooked directly in the gravy itself.

Usually, a variety of seasonal vegetables is used to improve the flavor as well as the nutritional value of Chicken Tikka Masala.

Some common vegetables that are often used in tikka masala include onion, tomato, eggplant, peas and okra.

Still looking for other options?

The reason cauliflower goes so well with Tikka Masala is because of the many spices that are used in both dishes.

Cumin, coriander and fenugreek are all flavors found in Tikka Masala and cauliflower.

This allows the two to easily pair together on your plate.

Cauliflower has a very mild flavor, which is why it pairs well with Tikka Masala’s spicy sauce.

Cauliflower absorbs spices very well, making it an excellent addition to any meal!

Carrots are a crunchy root vegetable that has a natural sweetness to it.

This sweetness goes well with the spices in Tikka Masala and can help to balance out the spice if it’s too strong for you.

Another reason to use carrots?

They add a new texture to the dish, which will help keep your taste buds engaged for longer so you don’t get bored of eating just one kind of food.

Onions are commonly served with Tikka Masala because they are sturdy enough to hold up to the thick sauce and can be cooked at the same time as the meat.

Onions also have a mild flavour that will not overpower the tikka masala.

They also add an extra layer of texture to the dish which enhances its overall flavour.

Using onions will give you an authentic and tasty version of this famous dish.

Broccoli goes well with Tikka Masala because it’s a rich, spicy dish and broccoli provides a nice, fresh foil to that richness.

It’s also fairly mild, so it won’t clash with the flavor of the curry.

Cabbage is a delicious, crisp addition to Indian cuisine.

It’s often served in salads and slaws, but it’s also a great complement to the rich flavors of dishes like Tikka Masala.

As a cruciferous vegetable, cabbage offers a number of health benefits, including cancer-fighting properties.

It’s also rich in fiber and vitamins A and C.

These benefits, along with its distinctive flavor, make it an excellent choice for pairing with Tikka Masala.

When you eat vegetables with your Tikka Masala, you’re not only adding taste, texture, and color to the dish; you’re also increasing the nutritional value of your meal.

Eggplant is a great compliment to Tikka Masala because it’s a starchy vegetable that soaks up the creamy sauce of the dish, while also offering its own distinct flavor.

If you haven’t tried it, you’re missing out!

Green beans (See Also: what to do with canned green beans?) are a great compliment to Tikka Masala because the flavor is so unique.

Tikka Masala is spicy, but it also has this amazing creaminess.

It’s kind of like the best parts of a Vindaloo and Korma all rolled into one.

And while you might think that green beans would be bland and boring, they actually have a lot of flavor.

They’re earthy and just slightly bitter. And that bitterness balances the creaminess in the sauce.

If you try it once, you’ll want to make it again and again.

Tikka masala is an Indian dish that’s usually made with chicken, yogurt, and spices.

It’s a complex dish that has a ton of flavor.

The simple answer to why spinach works so well with tikka masala is that the addition of spinach helps cut through some of the richness of the dish.

The more complicated answer has to do with how the flavors are composed.

Spinach has a relatively mild taste, so it doesn’t interfere with the other ingredients in the dish.

However, it does have a little bit of sweetness and spice.

The zucchini’s flavor will help balance the spiciness of the masala sauce.

It’s also an easy vegetable to cook—just throw it into the pot and wait until it’s done!

When you think of vegetables that go well in tikka masala, I’m guessing that the first things that come to mind are some of the basics: onions, peppers, maybe even tomatoes.

Mushrooms are a great choice for several reasons.

If you’re vegetarian or vegan, they’re a fantastic substitute for chicken or other meat, and they’ll hold up under heat and simmering longer than many other vegetables.

They also add an extra umami flavor to your dish that makes it much more complex than it would be with just the vegetables you typically think of when making tikka masala.

Tikka masala is a dish that’s incredibly easy to adapt, and it pairs well with just about any vegetable you might want to throw in.

But when you’re looking for a vegetable that’s going to pair particularly well with the rich, creamy flavor of tikka masala (and not get lost under the rest of the flavors), try asparagus.

Asparagus has a distinctive taste that stands out in almost any dish, and it can be used both raw in salads or stir-fried and included in rice dishes like tikka masala.

Because of its sharp taste, it’s great at cutting through the richness of this dish, creating a contrast in flavor that will leave you wanting more.

Many people wonder why corn goes so well in this dish, and it’s easy to see why.

After all, corn isn’t a common ingredient in most Indian dishes.

And yet, it works remarkably well with the other ingredients in tikka masala.

Well, first and foremost, corn adds an extra layer of flavor to this already delicious dish.

The spices used in tikka masala are incredibly complex and can be overwhelming for the tastebuds if you’re not prepared for them.

Adding sweet corn helps balance out those flavors and make them more palatable for most people.

It also adds some much-needed texture to the dish.

A lot of Indian food is pretty soupy or soft, which can make it hard to eat if you’re not used to that type of fare.

Corn gives you something to chew on as you eat your meal, making it a much more satisfying experience overall.

Sweet potatoes are a great source of Vitamin C and fiber.

They have been used for centuries in traditional medicine throughout Asia to treat ailments such as fever, coughs and colds.

They also contain antioxidants which can help fight off bad cells from forming inside your body!

You might wonder why do sweet potatoes go well in tikka masala?

Sweet potatoes are high in starch so they can be used as a thickener for sauces or gravies without adding too much fat like butter or oil would do.

The starch content also helps bind all of the ingredients together without making it too watery like some tomato-based curries tend to be when cooked over time on low heat with lots of liquid added during cooking process (e.g., chicken stock).

The peas in tikka masala are there to provide texture and flavor.

Most people agree that the peas give the tikka masala a nice crunch. This can make the dish more appealing to eat.

If you love peas, this is a great bonus for you!

Put some peas in your tikka masala recipe to add some texture and flavor to the dish.

Peppers are another popular vegetable to serve with tikka masala because they add colour and texture to this popular curry dish.

Peppers come in many different colours such as red, orange, yellow, and green; which provides a bright contrast against the dark brown colour of the tikka masala sauce.

Peppers also have a mild flavour which will not overpower the tikka masala sauce.

Why You Should Put Vegetables in Tikka Masala

The thing about chicken tikka masala is that it’s not really a sauce or a marinade. It’s a way of life.

It’s an integral part of the culture and tradition of many countries, but its true origins are hotly debated.

Some people say the recipe originated in India; others say it was invented in Scotland by a chef who added tomato soup and cream to curry to satisfy the British palate.

Some claim that the dish was invented by accident, when a customer complained that her chicken tikka was too dry.

And others say it was created as part of a deliberate strategy to “westernize” Indian cuisine and make it more appealing to wealthy English families.

Also, veggies can add a whole new layer of flavor to your tikka masala, as well as a ton of nutrition.

They’re low-calorie, full of fiber and vitamins, and they make you feel fuller faster so you eat less overall.

If you’re trying to lose weight, this is an excellent way to do so while still getting to enjoy your favorite dishes—just be careful to measure portion sizes!

A nice garden salad is the perfect side dish to accompany chicken tikka masala.

The mild flavor of the salad pairs perfectly with the spicy flavors of the dish.

You’ll want to opt for fresh ingredients like lettuce, cucumber, tomatoes, and onions.

While it may seem like a no-brainer, there is actually a wide variety of rice dishes that go with chicken tikka masala.

You’ll want to opt for basmati or jasmine rice, both of which have a mild flavor and work well with the spice profile of the dish.

A full-bodied red wine would pair well with the bold flavors of the dish.

The rich, full flavor of the wine would complement the richness of the curry, making it a perfect pairing.

The best red wine to pair with chicken tikka masala is a Cabernet Sauvignon.

Cabernet Sauvignon is a versatile wine that pairs well with many dishes and has the ability to stand up to the bold flavors of the dish. 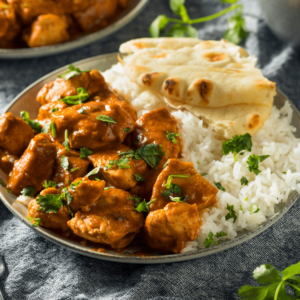