Seasoning is an important part of cooking, but it can be tricky to get right.

Seasoning pork chops, for instance, is one of the most common questions among amateur chefs.

The answer depends on your personal taste and what you want to use your pork chops for, but we like to recommend salt and pepper as a good starting point. You can also add other spices like paprika or cumin if you want something more exotic. If you’re planning on using the pork chops later, consider adding some citrus juices or vinegar. These ingredients will add a nice tangy flavor and will make the meat juicier when cooked later on!

Below, we’ve got the ultimate list of options for whatever kind of dish you’re making.

Whether you’re grilling, broiling, or pan-frying your pork chops, there are a number of spices that will give them an extra kick—and we’ve got plenty of ideas for how to use them.

What Seasoning to Put on Pork Chops

Here is a list of all the different seasonings you can use on your delicious pork chops:

This is a classic combination that can’t be beat when it comes to adding flavor to anything from meat to vegetables.

If you’re not sure where to start with your seasoning, these two are always a good place!

You can also use them together!

Just make sure they don’t overpower the other flavors in your dish—you want them to balance out each other and add just enough saltiness without being too salty!

Try using salt and pepper on:

It will go great with just about any meat or vegetable dish you can think of!

If you’re looking for something spicy and savory, then this is a great choice.

If you’re looking for a simple way to add some flavor without adding too much salt, then onion powder is your best bet.

It’s got a nice balance between sweet and salty, which means it’ll work well with pretty much any kind of meat or vegetable you want to cook up in the kitchen.

Plus, it’s really easy to find at your local grocery store!

Pork chops are often paired with oregano because it has an earthy flavor that pairs well with the meat.

You can use dried oregano in your marinade or sprinkle some on top before serving.

Rosemary is another great option if you want to add some herbaceous flavor to your pork chops.

You can use either fresh rosemary or dried rosemary leaves—either works well!

Just make sure to chop it up before adding it to your dish so that it doesn’t overpower everything else on your plate by being too large in pieces.

Turn your basic pork chop into something special by adding some Italian seasonings to the mix!

This spice mix is full of basil, oregano, and thyme—all things that go great with pork and make it taste like fall even if it’s still summer outside.

In addition to being great with avocado toast, basil is also delicious when rubbed onto pork chops before cooking them on the grill!

If you want something even stronger, try Thai basil instead of regular basil; its flavor is more intense and spicy than regular basil leaves’ flavor profile.

An excellent way to add some heat and spice to any cut of meat, Cajun seasoning is made from paprika, garlic powder, onion powder and black pepper—which means you’re getting a lot more flavor than just salt alone!

This spice isn’t just for sprinkling on deviled eggs in the springtime—it can also be used as a rub on pork chops before cooking them in the oven!

If you’re looking for something bolder than plain old paprika (which has hints of bell peppers), try smoked paprika instead!

It’s got a much deeper flavor that will really bring out the best in your pork chops.

If you like things spicy, then cayenne pepper is definitely the way to go when it comes time to season your pork chops!

Not only does it give them an extra kick of heat that goes perfectly with both sweet and savory flavors alike (like maple syrup), but it also adds another layer of complexity so that each bite is full of new surprises.

Thyme is an herb that works wonders with almost any meat—including pork chops!

You can add it directly to marinades or sprinkle it over top once they’re cooked to give them an earthy flavor with just enough bite to make them interesting without overpowering anything else going on in your dish.

Sage is another herb that you’ll see in a lot of different types of dishes—especially Italian ones like sausage and pork dishes!

It has a stronger flavor than oregano so you don’t need as much when seasoning your pork chops (but still make sure to season well).

You can use sage fresh or dried as well as combining both if desired!

It’s not just for Bloody Marys!

Crushed red pepper adds a nice spicy kick when sprinkled on top of your cooked pork chops and is also delicious when mixed with honey and balsamic vinegar to make a glaze for grilling or broiling your meat!

If you have an affinity for spicy foods but don’t want to sacrifice flavor when it comes to cooking your meat, chili powder is your best friend!

Sprinkle some on before cooking and then add some more after it’s done to really get those flavors going!

This earthy herb has long been used to season meat and fish dishes all over Europe and Asia—and it pairs especially well with pork!

Just sprinkle some over each side of your chop before cooking it up, or add some chopped leaves into your marinade for extra flavor punch during cooking time.

If you’re looking for something with a bit more bite than other spices, try dill!

Try rubbing some fresh dill onto your pork chops before cooking them and see if it doesn’t make all the difference in the world when it comes to enhancing their flavor profile!

Celery salt is one of those uncommon spices that can take your food from “meh” to stellar with just one sprinkle or shake of it over your plate.

It adds a savory celery flavor with just enough saltiness to make everything pop without overpowering anything else in the dish.

This marinade adds sweetness and flavor to your pork chops while also helping them retain moisture while they cook.

It contains soy sauce and brown sugar along with ginger paste and garlic cloves which makes it great for adding both sweetness and sourness to your meal.

Plus it’s easy to make at home!

What Is the Best Seasoning for Pork Chops on The Stove?

The best seasoning for pork chops on the stove is salt, pepper and garlic powder.

This combination of seasonings will give you a delicious meal that anyone will love.

The salt gives the pork chop flavor while the pepper gives it a spicy kick.

The garlic powder is added to give it an earthy flavor that will make your mouth water.

What Is the Best Seasoning for Pork Chops in The Oven?

The best seasonings for pork chops in the oven are salt, pepper, and rosemary.

Salt is a great way to add flavor to any dish—especially one that will be cooked in an oven.

Pork chops are especially good with salt because they can be a little bland on their own. The combination of salt and pepper gives them a nice kick while still allowing them to retain their natural taste.

Rosemary is another great herb that adds flavor without overpowering the meat itself.

It’s also known as “the meaty herb” because it has such strong undertones that can complement just about anything—including pork chops!

Rosemary is also great at helping keep your kitchen smelling fresh after cooking dinner because it’s so aromatic!

When Should You Season Pork Chops?

The best time to season pork chops is right before you cook them.

You can also season your pork chops after they’re cooked, but then you can’t control how much seasoning goes on each chop.

It’s best to season it before cooking if possible so each one has an equal amount of flavor.

Do Pork Chops Need to Be Seasoned?

Yes, pork chops do need to be seasoned.

Pork chops are best when they’re seasoned before cooking.

The meat is more flavorful and tender, and the seasoning helps to prevent the meat from drying out while cooking.

Seasoning pork chops can be done in a variety of ways.

Some people like to use a simple rub of salt and pepper, while others prefer more complex spice combinations that include ingredients like garlic powder or paprika.

In addition to adding flavor to the finished dish, these spices also help to keep the pork chop moist during cooking by helping it retain its natural moisture content during cooking. 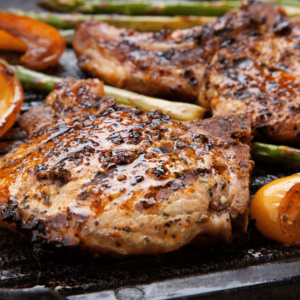 What Seasoning to Put on Pork Chops (18 Best Options)

With so many different seasonings to choose from, it can be hard to know which ones work best with pork chops. Here are a few tips to help you decide:1. Start with a basic rub. You can find rubs at most grocery stores, and they're usually made up of salt, pepper, and other spices. Rubs are great because they're easy to use—just sprinkle the seasoning evenly over both sides of the pork chops before cooking them.2. Add another layer of flavor with a marinade. Marinades are similar to rubs, but instead of being spread on top of your meat, they're mixed together in a liquid that gets absorbed by the meat while it sits in the refrigerator overnight (or longer). This gives you more time to let flavors soak into your meat than if you were using a rub alone.3. Use herbs and spices as garnishes instead of seasonings like salt or pepper! If you already have all of your prep done for dinner but want something extra special for presentation purposes (like garnishing with herbs or sprinkling some spices on top), then this is definitely a good option for you!
Print Recipe Pin Recipe
Prep Time 2 mins
Cook Time 2 mins
Total Time 4 mins
Course Main Course, Seasonings
Cuisine American
Servings 4 people
Calories 40 kcal

Keyword What Seasoning to Put on Pork Chops