If you’re a bacon lover, then you already know that bacon can be used to infuse flavor into just about anything.

But did you know it can also be used to explore the world of herbs?

Think about it: what goes better with bacon that its natural partners, herbs?

Herbs are a simple but powerful way to bring out the best in this fatty meat, and they’re so versatile.

You can use them to enhance tomato sauces, sprinkle them over salads, boil them in soups, or even serve them as a stand-alone side dish.

The possibilities are endless when it comes to herbs.

And now that we know how well bacon pairs with herbs, we thought we’d give you some ideas on what works best together.

Check out some of our top recommendations below!

What Herbs Go with Bacon?

Bacon is a fatty meat with strong flavors, so it needs herbs that can hold their own.

Rosemary in particular will stand up well against the bacon, and the piney notes of rosemary will help to balance out the saltiness of the bacon.

Thyme is also strong enough to cut through the fat and saltiness of bacon, and its minty qualities will help to add an extra layer of flavor.

Sage has more delicate flavor notes than either rosemary or thyme, but it still has a strong enough profile to work well with bacon.

It has notes of pine and citrus, which will complement the smokiness of the bacon well.

1. Rosemary: A Touch Of Piney Notes

Rosemary has a strong piney flavor and aroma.

The herb is made up of dozens of different terpenes, which are the compounds that give plants their distinctive scents.

The major terpenes in rosemary include alpha-pinene, camphene, and beta-pinene.

Because of its distinct terpene profile, rosemary pairs well with other savory and fatty foods like bacon.

Add some to your next bacon sandwich for a touch of piney notes.

2. Sage: The Woodsy Herbs You Know And Love

Sage is another herb that works well with savory meats like bacon because of its intense woodsy flavor.

Its major compounds are borneol, camphor, and pinene, all of which contribute to sage’s characteristic scent and taste.

When you want to add a little kick to your next BLT (or whatever you’re making with bacon), try adding sage to the dish!

3. Oregano: Adds A Pinch Of Pizza Flavor To Every Bite

From scrambled eggs to breakfast burritos to traditional BLTs, oregano is perfect for adding a bit of Mediterranean flavor to your most important meal of the day.

Just be careful not to add too much!

Since oregano does tend to be a bit spicy, too much can overwhelm your dish and make it difficult to enjoy the flavor of your bacon.

4. Mint: Cool And Refreshing In The Morning, Or Anytime, Really

Though some might think mint is better suited for sweets than salty meats like bacon, they would be wrong!

Adding mint leaves to your favorite bacon-based recipe—whether you’re cooking up a hot pan full of strips or just making a sandwich—will cool down even the hottest summer days and make everything feel just a little more refreshing.

5. Basil: Sweet And Savory At The Same Time

Basil is an herb you probably grew in your backyard as a kid.

It’s sweet, but it also has a savory side.

And it goes great on everything from tomato slices to spaghetti sauce.

But did you know that basil also pairs perfectly with bacon?

You can use it to make a creamy pesto sauce for your pasta and toss some crispy bacon in there for the perfect lunch or dinner.

6. Dill: The Unexpected Herb That Goes Great With Bacon

Another herb that goes well with bacon is dill.

It might not be the first herb you think of when you’re thinking of things to pair with bacon, but dill has an unexpected tanginess to it that complements the saltiness of bacon and provides a nice counterbalance to the fat in this meat.

Parsley is one of the most common herbs you’ll find on your table, but it’s been used for years for a reason: it tastes great with any dish.

It’s especially great with bacon—the two are a match made in heaven, as parsley is packed full of vitamins and minerals that will keep you healthy throughout your life.

If you’re a fan of aromatherapy and essential oils, then you’ll probably be excited by this next ingredient—lavender.

Lavender is one of the best essential oils to help you sleep and relax, so it makes sense that it would be used to make everything smell nice.

It pairs perfectly with bacon, which has a distinct flavor due to its fat content.

9. Savory: For When You Want Your Bacon To Be Herbier Than It Is Meaty

No herb is more savory than savory itself.

Its flavor vibrates with a really robust sage-like earthiness and just a hint of mint.

And unlike some other earthy-tasting herbs, savory’s spice doesn’t hit you all at once—it builds on you slowly, like a cloudy day on the Oregon coast (which is where savory comes from).

With its bold flavor and ability to build heat, savory is the perfect herb for when you want your bacon to be herbier than it is meaty.

10. Tarragon: When You Want To Go French

There’s something about tarragon that makes any meal feel fancy—and it doesn’t mess around on taste either!

Tarragon has an anise-y flavor (like licorice) that adds an extra layer of complexity to your bacon without overpowering it.

It’s also great if you want to turn your bacon into a French-inspired meal!

11. Bay Leaves: When You Want To Go Full Bay

Bay leaves are another great choice for when you want to go all-in on the herbs, and let the bacon serve as an accent note in the background.

They’re particularly good if you’re making a soup; consider adding them as an ingredient, and then take them out just before serving to make sure they don’t overpower the other flavors.

12. Chives: For Some Extra Oniony Goodness In Your Bacon Dish

Chives are often used as a garnish for soups and salads, but they can elevate the flavor of your bacon dishes too!

Chives have a mild onion taste that adds an extra layer of savoriness to your bacon dish without overpowering the meat itself. 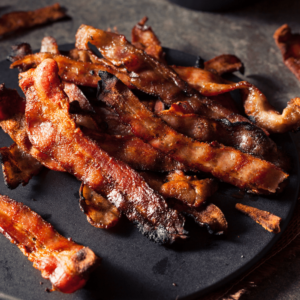 12 Herbs That Go with Bacon

What’s better than bacon?Absolutely nothing. When it comes to meat, bacon is definitely the king of all meats. It’s crispy. It’s salty. And it tastes great on pretty much anything ( besides for breakfast, you can use it to top a salad or make a BLT).But what if we told you there was a way to make this already delicious meat even better? Believe it or not, there is a way to take your bacon up a notch: by adding herbs and spices!When you add just the right combination of herbs and spices, they can transform the flavor of your bacon completely. So forget about buying pre-flavored bacon at the store next time—you can add all kinds of seasonings right at home to make your own unique flavors.
Print Recipe Pin Recipe
Prep Time 5 mins
Cook Time 5 mins
Total Time 10 mins
Course Herbs
Cuisine American
Servings 4 people
Calories 150 kcal