I’ve always loved making homemade soups, but I’m also crazy about how quickly and easily you can make them.

You’ll be amazed at how much creamy and deliciousness your soups can become just by adding a few simple ingredients!

If you love creamy butternut squash soup but find it a little too runny, I have the answer.

Here’s how to thicken your butternut squash soup!

It’s my favorite winter soup and I love it because it’s hearty, yet light and healthy, with a little bit of a sweet taste from the squash.

The only thing I don’t like about most butternut squash soups is that they tend to be too watery.

The best way to thicken a soup is to use a starchy ingredient.

I tried this for the first time the other day, and boy did it work!

The soup was thick and creamy after adding just one tablespoon of arrowroot to the pot while cooking.

And not only was the texture improved, but the consistency was improved as well.

It took on more of a gravy-like consistency, which works very well with a dish like this.

Arrowroot powder is a starchy powder made from the root of the arrowroot plant (Maranta arundinaceae), which is commonly grown in South America, Asia and Africa.

The main reason for using arrowroot powder is that it doesn’t have any flavor at all, so you get all of the benefits without having to worry about changing the taste of your food.

Cornstarch works well for thickening butternut squash soup, and it doesn’t cloud the soup either.

I would suggest using 1 tablespoon of cornstarch, mixed with 2 tablespoons of water, to thicken a batch of butternut squash soup.

Most people recommend flour for thickening soups and stews, but in my experience, cornstarch works better.

Flour will thicken the soup if added slowly, but it can also cloud the soup, and lumps of flour will not dissolve even with prolonged boiling.

Cornstarch is smoother and clearer than flour.

I would suggest adding the cornstarch after all the other ingredients are in the pot.

The soup should be almost done at that point, so you don’t have to boil it for long before serving.

Just as a matter of taste, I prefer the soup to be thicker, more like a stew. So I add flour, in one of two ways.

The best way is to put a tablespoon or so of flour into a baggie, add about a cup of the hot soup, zip it up, and shake vigorously until the flour has dissolved.

Then you add it back to the rest of the soup and cook for a few minutes more.

The second way is easier but can leave you with lumps of flour if you don’t cook it long enough: just whisk in about half a cup of flour directly into the soup.

If you do this, make sure to cook for at least five minutes more, stirring constantly.

You can also add dairy directly to thicken your soup without using a starch like flour or cornstarch as a thickening agent.

Simply stir in 3 tablespoons sour cream or yogurt per cup of liquid in your soup pot, then let it simmer for five minutes before tasting and adding more if necessary to reach your desired thickness.

You can also use heavy cream, but keep in mind that it will impart a rich flavor to your soup that might not be desirable depending on what you’ve made.

5. Add some cheese; Parmesan is best, but cheddar will do in a pinch

Adding cheese is probably the most common hack for thickening soups.

When you add cheese and heat it, it forms a roux, which will thicken your soup nicely.

The technique works well for soups that include a lot of milk or cream: tomato, potato, cream of mushroom.

Pro-tip: Add the cheese in small batches, mixing well after each addition to ensure an even consistency throughout the entire pot of soup.

You need to thicken butternut squash soup, but you have no cream.

You could reduce it, but who has that kind of time? What now?

Beat an egg yolk, stir a spoonful of the hot soup into it, and then stir it back into the pot.

Whisk furiously as you do so, or you’ll end up with egg drop soup instead.

It’s not an exact science, but if you’re careful about how you add the yolk and whisk quickly enough, it should work.

The soup will thicken almost instantaneously. If it’s still too thin for your liking, add another yolk.

But be careful: If you add too many yolks or don’t whisk them in properly, the result can be … unappetizing.

This trick works because of emulsion: The water droplets in the soup are evenly dispersed throughout the egg yolk.

The emulsified fat coats each water droplet and prevents them from joining together to form bigger droplets.

7. Cool the soup and refrigerate it

A great way to thicken up soups is to let them cool down in the fridge overnight.

I usually make mine the day before I’m going to serve it so that it’s ready to eat after I get home from work.

As the soup sits in the fridge, excess water evaporates off leaving behind all those delicious flavors!

How to Thicken Soups on The Fly

1. Cool the soup and refrigerate it overnight. The fat will rise to the top and congeal, making it easy to remove with a spoon. Reheat the defatted soup, and then reduce to thicken it.

2. Puree part of the soup with an immersion blender or in a regular blender, and then add back into the pot. The extra volume will dilute the flavor slightly, so make sure you add more salt and seasonings (as necessary).

3. Add cooked rice or barley (or any other cooked grain) to the soup—this is also a great way to add some heartiness and texture.

4. Add cooked lentils or beans (or any other cooked legume)—the same goes for these!

5. Add cornstarch or flour dissolved in cool water to the simmering soup until it reaches your desired thickness—be sure to cook for at least two minutes after adding thickener to let it cook off that raw flour taste. 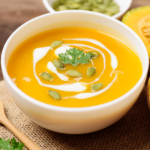 To thicken butternut squash soup, use an immersion blender or a regular blender. First, puree the soup in a blender until it’s smooth. Then, return the pureed soup to the pot. Add cream and stir. Cook the soup for about 10 minutes, and then serve.
Prep Time5 mins
Active Time5 mins
Total Time10 mins
Course: Soup
Cuisine: American
Keyword: How to Thicken Butternut Squash Soup
Cost: 1