If you love the flavors of Creole cuisine, then you know how important it is to have creole seasoning on hand.

Creole seasoning is a blend of herbs and spices that adds an unmistakable kick to dishes like gumbo, jambalaya, and red beans and rice.

But what happens when you don’t have access to creole seasoning?

Don’t worry – there are plenty of substitutes that can be used in its place.

From garlic powder and onion powder to paprika and oregano, here are eleven of the best substitutes for creole seasoning so that you can enjoy your favorite dishes without compromising on flavor.

What is Creole Seasoning?

Creole seasoning is a blend of spices used in Creole and Cajun cooking.

The exact proportions vary from recipe to recipe but the combination of these ingredients creates a flavorful mix that can be used as a rub for meats or added to soups and stews.

The flavors in Creole seasoning are bold yet balanced; it’s not too spicy or salty but still has plenty of flavor.

It pairs well with seafood dishes like shrimp gumbo or jambalaya as well as chicken dishes like red beans and rice.

You can also use it to season vegetables such as okra or eggplant before roasting them in the oven.

Creole seasoning is an easy way to add depth of flavor to any dish without having to measure out individual spices each time you cook.

If you’re looking for an all-purpose spice blend that will give your meals some extra zing then try adding some Creole seasoning next time you cook!

The 11 Best Substitutes for Creole Seasoning

Creole seasoning is a flavorful mix of herbs and spices, but it can be hard to find in some places.

If you’re looking for an alternative, here are eleven substitutes that will still give you great flavor:

Old Bay Seasoning is a blend of herbs and spices that originated in Maryland, USA.

It is most commonly used to season seafood dishes, but can also be used on meats, vegetables, soups, and salads.

It has a unique flavor profile that is slightly spicy with hints of sweetness from the paprika.

The combination of these flavors creates a savory seasoning that adds depth to any dish.

Pro Tip: To get the most out of your Old Bay seasoning try adding it to melted butter or olive oil before drizzling over fish or vegetables for an extra kick!

Cajun seasoning is a popular blend of spices used in Cajun and Creole cooking.

The ingredients are usually combined in equal parts to create a balanced flavor profile that is both spicy and savory.

Cajun seasoning has a bold flavor that can be used to add depth to dishes like gumbo or jambalaya.

It can also be used as a rub for meats before grilling or roasting them.

Cajun seasoning adds an extra kick of heat and flavor to any dish!

Greek seasoning is a blend of herbs and spices used to flavor Greek cuisine.

This combination of herbs gives the seasoning a unique flavor that can be used in many different dishes.

Greek seasoning is great for adding flavor to grilled meats like chicken or lamb.

It can also be used as a rub for fish or vegetables before roasting them in the oven.

Additionally, it’s delicious sprinkled over salads or added to soups and stews for an extra punch of flavor.

Adobo seasoning can be used to season meats, vegetables and even soups or stews.

Adobo seasoning has a savory flavor with hints of sweetness from the garlic and earthy notes from the oregano.

It’s not too spicy but it does have a bit of heat that comes from the black pepper.

The cumin adds an extra layer of depth to the flavor profile.

Pro Tip: To make your own adobo seasoning mix at home, combine 1 teaspoon each of garlic powder, onion powder, oregano, paprika and ground cumin with 1/2 teaspoon each of salt and black pepper in a small bowl. Store in an airtight container for up to 6 months!

Chili powder is a blend of ground spices used to flavor dishes, especially those with a Mexican or Southwestern influence.

Chili powder has a rich flavor that can be described as smoky, earthy and slightly sweet. It adds depth to dishes like tacos, burritos and enchiladas.

It also works well in soups, stews and chili recipes.

Pro Tip: Chili powder can be used to add heat without adding too much spice.

Start by adding 1 teaspoon of chili powder for every 4 servings of your dish; you can always adjust the amount depending on how spicy you want it!

Paprika is a spice made from ground, dried fruits of Capsicum annuum.

It is commonly used to add flavor and color to dishes like deviled eggs, goulash, and roasted potatoes.

Paprika can range in flavor from mild and sweet to hot and smoky depending on the type of pepper used.

Paprika has a mild heat that adds depth of flavor without overpowering other ingredients.

Mexican spice blend is a combination of spices used in Mexican cuisine.

This blend can be used to season meats, vegetables, soups and stews.

Mexican spice blend has a unique flavor that is slightly spicy with a hint of sweetness.

The chili powder adds heat while the other spices provide depth and complexity to the flavor profile.

It’s perfect for adding an extra kick to your favorite dishes!

Pro Tip: If you want to make your own Mexican spice blend at home, try combining equal parts chili powder, cumin, garlic powder and oregano with half as much paprika for a delicious homemade seasoning mix!

French seasoning mix is a blend of herbs and spices used to season dishes in French cuisine.

The ingredients are usually ground together into a fine powder or paste.

French seasoning mix adds an earthy flavor to dishes like stews and soups.

It can also be used as a rub for meats or vegetables before roasting or grilling.

Additionally, it can be added to salad dressings or sprinkled over roasted potatoes for extra flavor.

Pro Tip: To make your own French seasoning mix at home combine 1 tablespoon each of dried thyme leaves, rosemary leaves, oregano leaves and basil leaves; 1 teaspoon each of garlic powder and onion powder; and ½ teaspoon of freshly ground black pepper in a small bowl until well blended.

Cayenne pepper is a type of chili pepper that is commonly used to add heat and flavor to dishes.

It has a bright red color and can range from mild to very hot in terms of its spiciness.

Cayenne pepper is often used as an ingredient in creole seasoning, but it can also be used on its own for a spicy kick.

Cayenne pepper adds a unique flavor profile to dishes, with notes of smokiness and sweetness along with the heat.

It pairs well with other spices like garlic powder, paprika, oregano, thyme, and cumin.

Try adding some cayenne pepper to your next dish for an extra layer of flavor!

Italian seasoning is a blend of herbs used in Italian cuisine.

It typically contains oregano, basil, rosemary, thyme and sometimes other herbs like marjoram or sage.

The combination of these herbs creates an aromatic flavor that can be used to season many dishes from pasta sauces to grilled vegetables.

Creole seasoning is a blend of spices originating from Louisiana Creole cuisine.

This spice blend has a bold flavor with just the right amount of heat that will add depth and complexity to any dish it’s added to.

Try adding it to soups or stews for extra flavor!

Chili peppers are a type of pepper that is commonly used in many cuisines around the world.

They come in a variety of shapes, sizes, and colors, ranging from mild to very hot.

Chili peppers can be eaten raw or cooked and are often used as an ingredient in sauces, stews, soups, and other dishes.

Chili peppers have a unique flavor that adds depth and complexity to dishes.

They can also add heat depending on the variety you choose.

For example, jalapenos are relatively mild while habaneros are much hotter.

When substituting chili peppers for creole seasoning it’s important to remember that they will provide both flavor and heat so use them sparingly until you find the right balance for your dish!

What is Creole seasoning made of?

Creole seasoning is a well-known spice blend used in Creole cooking. It adds a special kick to any dish, and is composed of a combination of garlic, salt, black pepper, white pepper, oregano, parsley, and other herbs and spices.

This versatile mix can be used to season a variety of dishes, such as proteins, soups, stews, potatoes, vegetables, and more. With its unique flavor profile, it’s easy to see why Creole seasoning is a staple in many kitchens.

Is Creole seasoning the same as Cajun seasoning?

No, Creole seasoning is not the same as Cajun seasoning. While both are popular in the southern United States, their ingredients differ.

Cajun seasoning usually contains a blend of ground peppers such as black, cayenne, and white, while Creole seasoning tends to be more herbal, containing ingredients such as oregano, thyme, rosemary, and paprika.

Cajun seasoning is often spicier and more heavily seasoned, while Creole seasoning is traditionally milder and more balanced. Ultimately, the difference between the two comes down to personal preference.

Is Creole seasoning the same as Italian seasoning?

Creole seasoning is a combination of herbs such as thyme, marjoram, and parsley. Italian seasoning, on the other hand, is a blend of various dried herbs, such as oregano, basil, and rosemary, which are commonly found in Creole seasoning.

While Italian seasoning can be used as a convenient shortcut for Creole seasoning, it does not contain the same combination of herbs.

What are 3 differences between Creole and Cajun cooking?

Creole and Cajun cooking have several differences, with the most notable being their respective gumbos.

Cajun gumbo, on the other hand, typically doesn’t include tomatoes and may contain chicken, as well as ham or sausage.

Other differences between the two cuisines include the use of herbs and spices; Creole cooking tends to use herbs such as thyme, oregano, and basil, while Cajun cooking relies heavily on spices like cayenne, paprika, and garlic powder.

In conclusion, Creole seasoning is a flavorful and unique blend of spices that can add a delicious depth of flavor to dishes.

However, if you don’t have Creole seasoning on hand, there are many other spices and seasoning mixes that can be used as a substitute.

Each of these spices and seasoning blends has its own unique flavor, so you can experiment with different combinations to find the perfect flavor for your dish. 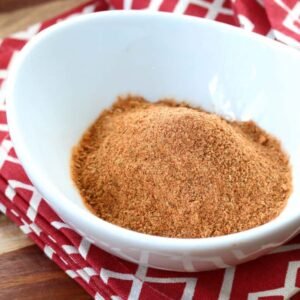 The 11 Best Substitutes for Creole Seasoning