They’re easy to eat, they’re delicious, and they just ooze with the crunchy texture that makes you want to keep eating them—even after you’ve had three.

But if you’re a vegan, granola bars can be difficult to find.

In fact, finding vegan snacks in general can be really hard.

So, what’s the best substitute for honey in granola bars?

The best substitute for honey in granola bars is, without a doubt, agave nectar. Agave nectar, which comes from the agave plant, is generally more affordable than honey. It has a low glycemic index and is often considered vegan, while honey is not.

It also has a neutral flavor that works well with the other ingredients in granola bars, while honey can sometimes overpower them.

Below, I’m breaking down the best ingredients to use instead of honey in your granola bar recipes.

I’ll give you the pros and cons of each one so that you can make the best decision for your taste buds!

13 Substitutes for Honey in Granola Bars

So, you want to make your own granola bars, and you need a good substitute for honey?

Well, I’ve got you covered!

Here’s my list of the 13 best substitutes for honey in granola bars:

Agave syrup is derived from the agave plant and can be used as a substitute for honey in many recipes.

It’s a bit sweeter than honey with less viscosity, so it should work well in most recipes that call for honey or other liquid sweeteners (e.g., molasses).

However, some people may prefer the taste of agave over honey due to its milder flavor profile—it’s not as strong as some honeys tend to be!

Another awesome option is to replace honey with a fruit-based sweetener.

This works great because fruit adds moisture to the granola, so you can use less oil in your recipe and get a healthier bar.

Some people also claim that using fruit juice instead of honey makes the bar more flavorful, because it’s really highlighting the natural flavors of the cereal.

For example, if you make your granola with lots of dried apple slices, you can use apple sauce as a sweetener and the final bars will have a wonderful apple-y flavor.

Another option is to use stevia-based sweeteners like Truvia or Pure Via.

These are great substitutes for honey because they are zero calories and don’t affect your blood sugar level, which makes them healthier than most other sweeteners.

Stevia tastes very different from honey though—it has more of an anise flavor than a floral flavor—so you may want to experiment with slightly different ingredients to create a complementary flavor profile for your granola bars.

Pure maple syrup is not as thick as honey and has a lighter, more subtle taste, so it doesn’t overwhelm the rest of your flavors.

It also blends into the rest of your ingredients much more easily than honey.

I know what you’re thinking: this sounds weird. But trust me!

This is one of those “stranger things have worked” situations.

Erythritol is a sugar alcohol that won’t raise your blood sugar levels, so it’s great for folks who are looking for a healthier alternative to sugar (and especially honey) in their recipes.

It’s also significantly less sweet than honey or regular sugar, so keep that in mind when using it—you may need to add more to get the desired sweetness level.

Molasses has a pretty strong flavor that can add extra oomph to your granola bars.

It is made by boiling cane sugar juice or sugar beets multiple times and then removing the syrup from the crystals.

The first removal gives us light molasses, the second gives us medium molasses, and the third gives us blackstrap molasses.

The latter is the darkest of them all, but it also has the most nutrients and minerals.

Another substitute I recommend is coconut nectar.

Coconut nectar is made from coconuts, obviously! You can find this in health food stores or online.

It’s less sticky than honey and has a slightly sweet flavor that will work well in your granola bars.

You’ll want to use this as a 1:1 replacement for honey in any recipe; just swap out the honey for coconut nectar and follow the rest of your recipe as normal!

Brown rice syrup is made from rice (duh) and has a rich, nutty flavor.

Not only that, but it contains certain vitamins and minerals that aren’t present in other syrups like agave or maple syrup—that’s right; it’s not just for granola bars anymore!

You can use brown rice syrup as a substitute for honey in any recipe.

Just remember to heat the mixture during cooking (this keeps the syrup from becoming too thick).

Date paste is made from dates and water, which makes it a good choice for those who don’t want to use animal products.

It’s also good for when you’re trying to reduce your refined sugar intake and wants something more natural than agave syrup or maple syrup.

Another great option is barley malt syrup, which has a robust taste that can be used to give depth to any recipe.

It has a rich molasses-like flavor and a viscous quality similar to honey, although it is much sweeter than the former and lighter in color than the latter.

Sorghum syrup is made from sorghum cane, which is similar to sugar cane or sweet corn.

Sorghum syrup is extremely rich in flavor, with molasses-like undertones and a caramelized finish.

Its sweetness is milder than that of honey.

This means that you don’t need as much of it to balance out other flavors in your food.

In addition, this type of syrup has more nutritional value than honey does – in fact, it’s one of the healthiest sweeteners on the market!

Corn syrup can add a lot of sweetness to your granola bar without having to worry about hurting our bee friends.

However, it does come with some downsides – it is very high in sugar and not so great for your health.

So I would only recommend this if you want something that tastes really sweet but don’t care too much about the health value of your snack.

Another substitute you could use is golden syrup. Golden syrup is similar to honey in terms of how it looks and how it tastes, but it’s made from sugarcane instead of bees!

It’s also a lot cheaper than honey, so if you want to save money while doing your part to save the planet, this is definitely a good way to do it. 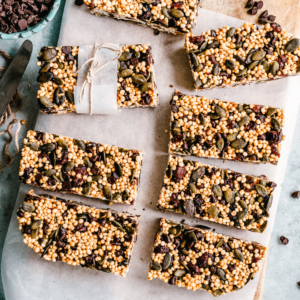 13 Substitutes for Honey in Granola Bars

Granola bars are typically sweetened by honey. However, you can use other ingredients in its place: maple syrup, brown rice syrup, or agave nectar. These alternatives still provide the same stickiness that is needed to hold the granola bar together.The best part is that these substitutions will not change the taste of your granola bar!
Print Recipe Pin Recipe
Prep Time 5 mins
Cook Time 5 mins
10 mins
Course Dessert
Cuisine American
Servings 4 people
Calories 310 kcal