I’ve heard that chicken tortilla soup is so delicious because it has the perfect blend of flavors, textures, and consistencies.

I mean, it’s definitely a hearty and delicious soup, but I think it could use something more.

I know, I know, you’re thinking “You’ve never had chicken tortilla soup, have you?”

But, believe it or not, you can actually make this creamy and flavorful soup thicker!

So, without further ado, let’s see how we can thicken this lovely soup!

To thicken a chicken tortilla soup, you’ll want to cook some onions and peppers in a skillet. Once the vegetables are cooked, you can transfer them to a blender along with the rest of the ingredients. Pulse until smooth and serve.

But, if you’re looking for other ways to thicken your soup, keep reading!

The most common thickening agent for soups, gravies and sauces is cornstarch.

It’s a powdery starch extracted from corn kernels that dissolves in cold water but can withstand high temperatures, so it works well with hot liquids like tortilla soup.

Add 2 tsp. of cornstarch to 1 cup of water and stir until dissolved, then add the mixture to your soup and cook for five minutes.

If you don’t have cornstarch on hand, flour will work too, although it takes twice as much flour as cornstarch to thicken liquids.

If you’re making your soup in advance and have time for the flavors to meld, adding cream or yogurt to the broth will thicken it up nicely.

Once the soup has been fully cooked, remove it from the heat and stir in a cup or two of heavy cream or plain yogurt.

Let the soup cool down completely before transferring it to an airtight container, then refrigerate it overnight.

The next day, reheat the soup slowly over medium-low heat, stirring frequently. The cream will help thicken the broth as it heats up.

3. Purée some of the soup

If you’re looking for a long-term solution, puréeing some of the soup is an easy way to thicken it up and boost flavor at the same time.

Using an immersion blender (or transferring to a blender), carefully purée about half of the cooked vegetables with some of the broth until smooth.

Return everything to the pot and continue to simmer until heated through and thickened slightly.

Another way to thicken your soup is to mix flour and water.

Mix 1 tablespoon of flour with 2 tablespoons of water in a small bowl until the mixture is well combined.

Add this mixture to your soup, and cook on medium heat until the soup thickens.

Make sure you stir constantly while adding the flour so it doesn’t clump up.

To bring your soup to the right texture, add no more than 1/2 cup at a time. Stir it in and let it melt before deciding whether you need more.

Once you’ve added enough, the soup should be just thick enough to coat the back of a spoon.

Add pureed veggies like potatoes or carrots to give your soup more body.

You can puree them in a blender, food processor or with an immersion blender right in the pot before adding them back into the soup.

If your tortilla strips are homemade or particularly hearty, they’ll help thicken your soup as they soak up liquid.

You can also try crumbling store-bought tortilla chips into your soup and letting them soften for a similar effect.

Adding rice or quinoa to your soup is a great way to thicken it up and add some staying power. Cook your grain of choice in chicken broth before adding to the soup.

For extra flavor, use cilantro-lime rice or quinoa.

Masa harina is a finely ground corn flour that’s used to make corn tortillas. It thickens just about any liquid it’s added to, and adds a subtle corn flavor.

To thicken chicken tortilla soup with masa harina, first combine 2 tablespoons of the flour with 1/4 cup water in a small bowl until smooth; stir until no lumps remain.

Add the mixture to the soup, stirring until well combined.

If your soup isn’t as thick as you like it at this point, repeat until it reaches the desired consistency.

Arrowroot is actually a starch extracted from the root of the Maranta arundinacea plant, which is found in tropical South America, Asia and Africa.

It’s used as a thickening agent in many recipes, including chicken tortilla soup!

If you love chicken tortilla soup, but sometimes find yourself wishing it was a little thicker, this might be the solution for you.

When I make chicken tortilla soup, I like to add a can of black beans to the pot along with some cumin and chili powder.

Then, when the beans are tender, I take out about 1/4 cup and mash them with a fork until they form a paste (or “mash” would be more appropriate).

Then I add them back into the soup which makes it nice and thick.

If you want a truly creamy and luscious soup, use egg yolks to thicken it. The secret is to temper the egg yolks by slowly whisking in some of the hot broth.

If you add the egg yolks directly to the soup without tempering them, the eggs will curdle.

The process is simple.

This method thickens soups like chicken tortilla soup with a rich creaminess that’s similar to a béchamel sauce.

It’s also used in many classic French sauces like hollandaise and béarnaise.

13. Mash some avocados and stir into the soup

Make sure your avocados are well-ripened, so they’ll mash easily in a bowl. Stir the mashed avocados into the soup and heat through before serving.

You can also make guacamole, then spoon it over individual bowls of soup.

Stir a 15-ounce can of refried beans into the soup and heat through before serving.

This will not only thicken the soup, but it will add a lot of extra flavor as well. 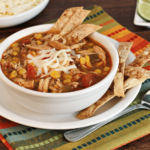 To thicken chicken tortilla soup, you can use cornstarch or flour. When using flour, it’s best to first combine the flour and some water in a small bowl. Once the mixture is smooth, you can then add it to the soup and continue stirring until the soup thickens. If you’re using cornstarch, you can just add a bit of the broth from the soup to the bowl of cornstarch and whisk it together.
Prep Time3 mins
Active Time3 mins
Total Time6 mins
Course: Soup
Cuisine: Mexican
Keyword: How to Thicken Chicken Tortilla Soup
Cost: 1