If you’re anything like me, you love teriyaki sauce.

But who has the time to get all the ingredients together?

And who keeps sake around the house, anyway?

Well, I’ve got some good news for you: No need to keep sake in your cupboard any longer!

So, what’s the best substitute for sake in teriyaki sauce?

There are a number of effective substitutes for sake in teriyaki sauce, including rice vinegar (the most common), dry sherry, red wine and beef broth. The exact substitute used depends on the flavor profile and texture you’re aiming for.

In this post, I’ll walk you through 10 substitutes for sake in teriyaki sauce.

10 Substitutes for Sake in Teriyaki Sauce

Sake is a delicious addition to teriyaki sauce.

It adds flavor and depth to the sweet, salty, and umami-rich glaze that clings to meat and vegetables.

But sometimes you don’t have sake on hand, or you just want a different flavor profile.

Sake isn’t the only ingredient that can give you a lustrous, shiny glaze with a sweet-salty balance that makes your mouth water—here are 10 substitutes for sake in teriyaki sauce:

If you don’t have sake on hand, dry white wine is a great alternative for its similar flavor profile.

It pairs very nicely with sweet and tangy dishes and is full of antioxidants!

You can use it to make a teriyaki sauce that tastes just as good as the original.

First, make sure you have enough dry white wine on hand.

If you don’t have any, you can substitute with a different alcohol that has a similar flavor profile like sake.

Then, just follow your favorite teriyaki sauce recipe and substitute the sake with dry white wine!

Rice wine vinegar can bring a similar sweetness and umami flavor to your dish but with a slightly more acidic taste.

You may also want to reduce any other liquids in the recipe by up to 2 tablespoons per serving if you find that the flavor is too strong or intense.

If you’re looking for a suitable substitute for sake in teriyaki sauce, mirin is an excellent choice.

It’s made from the same ingredients as sake, but it has a higher sugar content because it’s also fermented with rice.

Mirin is not just a great substitute because it has a similar taste to sake, though.

Mirin can also tenderize meat and help mask any dishes with strong fishy and gamey tastes(source). It adds luster and a nice glaze to dishes, too!

To use mirin in your teriyaki sauce, simply add it in place of the sake at the same ratio called for in your recipe.

While sake is the traditional alcohol used in teriyaki sauce, you can use sherry as a substitute.

Sherry has a similar flavor profile to sake because it’s made using the same process; it just doesn’t have as much alcohol content.

If you want something sweeter, try substituting dry sherry instead of the sweet version.

Sherry also comes with some of the same heart-healthy benefits associated with red wines, which are known for containing antioxidants and lowering bad cholesterol (LDL)(source).

That means you can sub in sherry while making a teriyaki dish and get some health benefits at the same time!

To add sherry to your teriyaki sauce, simply substitute it for sake in equal amounts.

For example, if your recipe calls for 1 cup of sake, use 1 cup of sherry instead.

Vermouth is another alcoholic beverage with a similar flavor profile to sake—it’s not as sweet and has less alcohol content than other options on this list, but it will still work well in your dish if you don’t have sake on hand.

It’s highly aromatic and flavorful, so the teriyaki sauce will still be tasty when you use it instead of sake.

Teriyaki sauce usually calls for about half a cup of sake, so you can use the same amount of vermouth to start.

You may need to adjust the amount based on personal taste once you try it out.

If you’re worried that adding vermouth to your teriyaki sauce might add too much flavor, it should still be fine—it’s a very light-tasting alcohol, so it won’t overpower the rest of the dish.

And even if you were concerned about using any alcohol at all in your recipe, fear not: most of the alcohol will cook out over time.

Pro tip: A glass of vermouth every day can give your body a digestive aid, boost your immune system, and reduce stress(source).

While they sound similar, try not to confuse this ingredient with cooking sherry.

This wine has a rich and flavorful complexity that will complement the other ingredients in your sauce perfectly.

To use, add in half a cup of Shaoxing wine for every cup of sake normally called for in your recipe.

If you’re looking for a substitute for sake in teriyaki sauce, apple juice/cider is a great option if you’re cooking for kids or just want something that doesn’t contain alcohol!

Here’s how I use it:

This carbonated drink has a sweet flavor with some tartness and spice from the ginger root that it’s made with.

It pairs well with fish, vegetables, and sauces like teriyaki sauce because of its light taste and effervescence.

Orange juice is one of our favorite replacements for sake.

It adds a bold citrus flavor that makes your dish pop—plus, orange juice is high in antioxidants and micronutrients like vitamin C, folate, and potassium(source).

To make your own teriyaki sauce using orange juice as the alcohol substitute, follow the recipe below:

The tangy tang of lemon or lime juice adds a punch of bright flavor and keeps your sauce from becoming too sweet.

Lightly simmering the lemon or lime juice with the other ingredients also adds a smoky depth to your dish.

How to Choose a Substitute for Sake in Teriyaki Sauce

While teriyaki sauce is traditionally made with sake, there are lots of situations in which you might want to substitute a different liquid.

Here are a few tips to help you find the perfect replacement:

1. What Flavors Do You Want to Highlight?

Are you trying to keep the flavor profile exactly the same as it would be with sake, or are you looking for something new?

If you’re looking for something new, try replacing sake with one of your other favorite liquors.

Vodka can give teriyaki sauce a lighter, brighter flavor, while rum can make it taste deeper and more complex.

2. Does Your Recipe Call for Cooking with The Alcohol?

If so, it’s important to make sure that you choose an alcohol that has a high alcohol content—otherwise, most of it will evaporate out of the sauce during cooking.

Vodka and rum both have high enough alcohol content to work well in this situation.

3. What Sorts of Flavors Do You Want Your Sauce to Pair Well With?

Teriyaki sauce pairs extremely well with white rice, so if you’re using it on top of noodles or some other type of whole grain pasta, consider using a darker-colored liquor like rum instead of vodka. 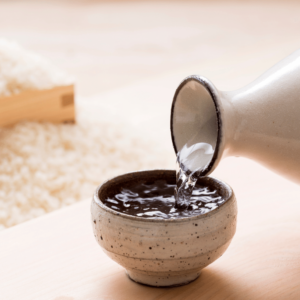 10 Substitutes for Sake in Teriyaki Sauce

When it comes to choosing the right substitute for sake in teriyaki sauce, you have to consider what types of alcohol you want to use. Some people like to use wine, while others like using other types of spirits. There are lots of different options out there, so it's important that you find one that works well with your taste buds!For example, if you're going to be cooking with chicken or beef, then wine is probably best because it will help tenderize the meat and add flavor at the same time. If you're planning on using tofu or fish instead though (maybe even just vegetables), then spirits might work better because they're less likely to overpower everything else on your plate with their strong flavors.
Print Recipe Pin Recipe
Prep Time 5 mins
Cook Time 5 mins
Total Time 10 mins
Course Sauce
Cuisine Japanese
Servings 4 people
Calories 125 kcal