The easiest way to spice up your cranberry sauce is by adding a little bit of cinnamon. It’s a classic pairing for Thanksgiving. Also, if you’re looking for a more exotic pairing, you could add cardamom, nutmeg, cloves or even star anise.

Cranberry sauce is one of those holiday dishes that people tend to pass by, thinking it’s the same old thing year after year.

No one wants to be that guy or gal who brings yet another plate of this ho-hum condiment a decade after they’ve last been to holiday dinner at Grandma’s.

But hold on just a minute — cranberry sauce shouldn’t just be forgiven for its repetitive reputation.

In fact, you’ll end up pleasantly surprised if you give it a chance with one of these 10 best spices for cranberry sauce!

What Spices to Put in Cranberry Sauce: 10 Best Spices

Cranberry sauce is a Thanksgiving staple, and we all love it, but could the flavor be even better?

You bet it can!

Let’s take a look at 10 of the very best spices which you can add to your cranberry sauce before serving.

Nutmeg is a spice that goes well in cranberry sauce, among many other foods.

It’s a sweet and warm spice, and it can be used to add flavor to soups, fruit pies, and even hot chocolate.

When you’re making your own cranberry sauce, you can use a fresh nutmeg seed or ground nutmeg.

Just remember to keep the amounts low, unless you want a spicy dish.

In our humble opinion, cinnamon is one of the best spices for just about anything: it makes everything taste better!

It’s great for sweet dishes and savory dishes, and it’s also good for you.

Cinnamon helps fight yeast infections and helps lower blood sugar, so there’s no reason not to add it to your cranberry sauce!

Cardamom is a sweet and warming spice that can be purchased in either whole pods or ground.

The pods have a more delicate flavor, and are used mostly for infusion.

If using cardamom pods, crush them lightly by rolling over them with a rolling pin before steeping them in the sauce to release their flavors.

Ground cardamom is much easier to use and will blend into cranberry sauce well.

Add a teaspoon of cardamom to a small batch of cranberry sauce, then taste the mixture and add more if desired.

Be aware that the spice has a strong flavor, so start with a small amount and increase as needed.

Orange zest is a nice addition to cranberry sauce.

Try adding a few tablespoons of orange zest to your cranberry sauce, and you’ll be pleasantly surprised by the resulting flavors.

You might not think of vanilla extract as a common staple in cranberry sauce, but it is a nice addition.

A blend of cinnamon, nutmeg, ginger and allspice, this adds a lovely warm touch to cranberry sauce.

Try sprinkling a little on top as a garnish, or mixing in a teaspoon while cooking.

I love cranberry sauce, but I don’t necessarily love when it tastes like jellied sugar soup. So I’m always on the lookout for ways to jazz it up.

One of my favorite ways to do that is by adding apple pie spice! It’s actually a combination of cinnamon, nutmeg, allspice, and cloves, and it adds a comforting warmth to the sauce that makes it feel like a holiday treat.

Especially if you’re making your own cranberries, it’s pretty simple to stir in some apple pie spice while they’re boiling—or just sprinkle it on top after the sauce has cooled!

Mace comes from the same tree as nutmeg—it’s just a different part of the seedpod.

Mace is good in cranberry sauce because it has a slightly more delicate flavor than nutmeg.

And if you’re out of mace, grinding up some whole nutmeg seeds will do the trick.

Cloves have an incredibly strong flavor, so they should be used sparingly.

They go well in both sweet and savory dishes as well, but you’ll want to use them sparingly if you’re going to use cloves in your cranberry sauce.

One or two cloves will do.

Things to Consider When Putting Spices in Cranberry Sauce

There are many things to consider when you’re putting spices in cranberry sauce.

Many people think that if the spice is in the pantry, it belongs in the cranberry sauce with no further thought, but that’s not always true.

There are a lot of factors you should consider before you put spices into your cranberry sauce.

First, it’s important to make sure that the spice actually fits the rest of your flavors.

If you have a cumin-cranberry sauce and you add allspice, that might not be the best match—it could end up tasting like an odd combination of cumin and Christmas.

Make sure that you choose spices that will complement what you’ve got going on, not those that will create weird patterns of flavor in your cranberry sauce.

Second, think about how much spice there is in your cranberry sauce—you don’t want to overpower it with one flavor or another.

It’s important to find a balance between the amount of spice and your overall flavor profile.

If you go too far with one or the other, then it can get out of hand really quickly—nobody likes a too-spicy cranberry sauce!

Third, think about how much time you have to make your cranberry sauce.

If you only have an hour and a half from start to finish, you might want to stick with a recipe that uses spices you already have in your pantry.

But if you have all day, then by all means—get creative!

Next, remember that some spices can mask the flavors of others.

For example, if you’re going for a bold flavor profile that includes cinnamon and sage, think twice before adding just any old spice into the mix.

It might be best to limit yourself to two or three spices so that they don’t overpower each other’s taste. 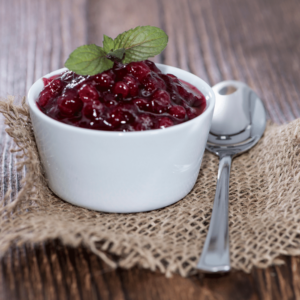 What Spices to Put in Cranberry Sauce: 10 Best Spices

Keyword What Spices to Put in Cranberry Sauce